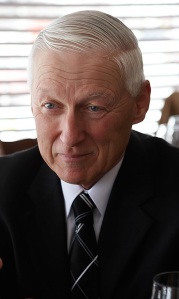 A Sunday late-afternoon trip to Hen House. Completely out of paper towels and this household wouldn’t know how to exist without paper towels.

The store has a promotion going on. With enough points, earned by spending in the store, you can buy dinnerware. My daughter, Meghan, liked the pattern and so little by little we’ve been accumulating plates and bowls.   She and her boyfriend, Isaac, had gotten some of the pieces when they were in Kansas City last. That consisted of two plates and two bowls. Clearly they were bare-bones-ing it.

I decided that I would get her the remaining pieces and instead of using points (I only had 27), just purchasing what I didn’t have points for. While explaining all this to the checkout girl, a man in the lane beside me, said, “Here, I have 180 points that I’m not going to use. You can have them.”

Who says the world is falling apart? Not while this nice human being is walking around.

Who says people just won’t go out of their way to help someone else? It’s not like I was dying on the sidewalk. I was getting dishes. Who says that the jerk on the freeway is the norm?  He won’t let me get over without knocking his bumper off, so that I can exit.

Of course my grocery store comrade’s thoughtfulness doesn’t make front page news. This is a guy who made no big issue of his generosity. Just a nice guy. Guessing that this is what just comes naturally to him. And I bet he has a mom that is the same way, maybe even a couple of brothers and a few kids. All impacted by his goodness.  See? See how those ripples get wider and wider, encompass more and more people?

I work with a lot of people like this. My closest colleague, who works with alternative kids too, has, on more than one occasion said, “Are you okay?” when she felt, emanating from me that I-can’t-do-this-job-one-more minute vibe and prepared herself for a meltdown of monumental proportions. I find Dots in my mailbox on a regular basis. I have custodians that greet me like they mean it, who fix/move anything I need help with at the same speed Jimmie Johns  delivers. Fast. I work with an office staff that doesn’t frown when I deliver my attendance sheet a good two hours late. Appreciation on a regular basis from the school counselor. A science teacher who goes out of her way to say, “I am glad you are here and you do a great job” after an irate parent said, “What are you doing here?” in a meeting. A kid who says, “How’s your hip, Mrs. Dickinson?” prior to my surgery. Or the parents who went out of their way to find me after eighth grade graduation to thank me for what I have done for their student. And to hug me like they mean it. Not a side hug.  And yup, you guessed it, a phone photo op.

Going the extra 5,280 feet.  Isn’t this what everyone does? No, it’s not. Which begs the question, “Why not?” Have we become so focused on ourselves, so busy doing what we need to get done, faces in our i-phones, that it doesn’t even occur to us anymore? Are we busy checking our to-do list so that we miss those opportunities? When was the last time you sent someone a letter? In-the-mail kind of letter. Listened. Not give seventeen opinions, but just sat to hear what the other person came to tell you. Brought water to the Google Fiber installers when it’s 112 with the heat index. Been handed a nice note from a student and instead of a perfunctory glance and a half-hearted “nice” you gushed to the point of embarrassment if one of your colleagues was listening.  Handed the homeless guy a $5 gift certificate to McDonald’s. It just might be all he gets to eat that day. Have we become so blinded by our lives that we forget there are other lives in our very midst? Have we followed up? With a kid, any kid, who’s had a rough day. With an adult who’s close to tears.  With the man in the produce aisle who bonks his head on the cart, retrieving something he dropped.

One kind word can change someone’s entire day.  Make this your day to do that.