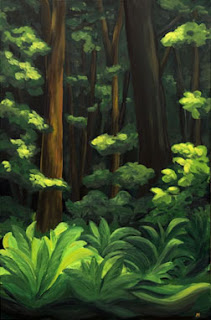 A few years ago, I was wandering down one of my favourite trails that is just down the street from my house here in Muskoka. It was one of those rare occasions when I left the camera at home and communed, uninterrupted, with Nature.

It proved to be an almost 'spiritual' experience. This was a few months before I started blogging and I e-mailed the story to a friend. A few days ago, I went looking for that story again and couldn't find it anywhere. I was lucky to discover that my friend had archived it and that I get to share it with you today:

I decided to go for a walk on one of my favourite trails, this afternoon. You know, the one they are going to pave over....  I normally don't see much more than a few birds or a distant deer along there lately - but today was extraordinary.

Right off, my path seemed to be marked by crow feathers - tons of them. By the time I reached the hemlock grove, I could feel myself calming right down. An ATV had gone through very recently and mucked up the trail, but did leave some rather nice little 'ponds'. As a approached one - there was a series of splashes. I looked closer - FROGS! I hadn't seen any back there before! Gorgeous little dark green brown ones.

Now I used to hunt and catch frogs as a child all the time - and I assure you, once they detect you, they go in the water and wait. I've sat for nearly an hour and gotten little more than motion. Today, this one little guy looked at me from the water. So, I looked quietly back at him. He jumped out right in front of me and sat there and stared at me until I got up to leave!

A few minutes later, I scared some deer and I watched their tails disappear into the bush. This was great because I can count on two hands the number of times I even see them here. But that wasn't going to be the last of it..... I sat under my favourite pine and got lost in thoughts - some about growth, some about spirituality and many more mundane. I must have sat for an hour based on the time when I got home.

On my way back, not two minutes from the pine, I thought about a detour. I was just making my way down the sand when - deer! The same ones, I think. Anyway, I froze, expecting them to scamper off. They froze instead. So I stood there and they watched me. A curious one in the front came up within 15 or 20 feet of where I was standing. Unfortunately, the wind was from behind me, so her nose was in there air and I am certain she would have come closer, otherwise. But she clearly saw me. I shifted, she cautiously watched - and then began munching away with her two friends, keeping an eye on me, but staying quite close!! Once they had wandered off a little and I could move without scaring them, I wandered away.

On the way back, I was passing through the exact same section of trail that I had passed the hour before. It was wide, with the trees quite far apart. I didn't have a chance to see it - much less was I expecting it - but I became entangled in a spider web - with no place to hold itself. Now where did this come from?? There were two spiders in it which became entangled with me. The first I found right away and gently swung it on its thread to a nearby branch. The other I found on my arm (I had raised my hands when my eye caught that I was about to walk into the web) and I brushed her off..... OK - I was a little freaked out - but they were small, so I coped! LOL!

As I was about to go along the last leg of the trail, a cacophony of crows burst from the forest floor just behind me and flew straight at me! Again, within 15 or 20 feet, they abruptly changed direction... I wonder if one was a raven? One voice was lower than the others. More crow feathers led me back home. At the edge of a trail, a small woodpecker landed just above my head on a tree and seemed totally oblivious of my presence. Half the time it was like I wasn't even there until the animals got very close. Closer than most experiences I have had, besides owls!