Almost A Week Since Hurricane Sandy Came To Visit

What a week it's been here since Hurricane Sandy decided to visit.  A week ago, we were bracing for the incoming storm and hunkering down in our homes (or) evacuating in the mandatory evacuation areas. I lost my power around 8 p.m. on Monday and got it back on Thursday night. I've been posting on Facebook as best as I could, partly to pass the time, partly to let others know I was ok, partly because I wanted to journal in some way and social media was the easiest and partly because I wanted to find something - anything - to appreciate through it all. Today I got my cable and internet back up and running, so I thought I'd make a blog post and use this as my Facebook update for the day.

Yesterday I discovered a Staten Island Community Board on Facebook for both victims who need help and for volunteers willing to serve.  There's a LOT of information there and it truly shows the value of social media in times like these.  I had read they needed clothing, so I spent Saturday gathering up some things around the house but later read online that they didn't need clothing any longer. There was a post about a restaurant here in Staten Island that had a lot of supplies and needed help transporting it to one of the locations where some of the volunteer teams are stationed.

Since my gas tank is still rather abundant since I last filled it,  I thought I could help out by transporting supplies from the restaurant to the volunteer area. I am blessed with and appreciate a fairly short commute to work, and especially by New York City standards.

As I made my way to the restaurant, I saw runners who had made their way from the Staten Island ferry terminal and were running along the road. They looked to be traveling/running together, but were definitely going at different paces in different groups. Now I'm not sure where they were going, as the shoreline where supplies and volunteers is not straight up on that road, but many looked liked they had supplies with them, by evidence of their plastic bags and also the people accompanying them with backpacks loaded down on their backs. Staten Island has a lot of hills so they were definitely getting a work-out this morning. 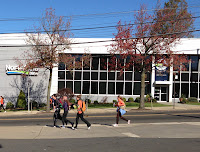 When I arrived at the restaurant, I saw that they had a truck there, so I wondered to myself if they still needed people to transport supplies in their cars. As I quickly learned and probably should have anticipated, yesterday's social media "news" is already "old," and they had delivered everything yesterday when the post was made. But they now have a truck, so I didn't need to spend my gasoline by delivering anything else.  So I decided to go to the nearby CVS store and pick up some bleach and baby wipes: supplies I knew were on "today's" list. I imagine they will be on many "tomorrow" lists, too, as the clean-up will take a long time.

As I entered the store, there was a group of National Guardsmen sitting on the cement wall outside so I thanked them for their service on my way in.

With the bleach and baby wipes in tow, I made my way back to the restaurant where friendly young volunteers helped me load it into the back of the truck.  It was there I learned they planned to make these runs all week - and for as long as is needed. 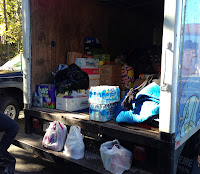 We began to talk about how people outside of Staten Island could help, as I've been asked that question from friends outside of New York and also through my posts on Twitter.  One of the women there was having supplies sent to her from friends and family in other places and she is personally delivering everything when they arrive later this week. Both the NY1 channel (a local cable news station) and the community are saying the best way for individuals outside of NYC to help is with cash donations. They mentioned that for companies, supplies are better.

The next question is, to what organization or which way is best? I personally feel that people should follow what feels good for them.  Giving is an act from the heart, so I believe that following your heart is the best way to determine how to give your love and your loving funds.  With that said, I was asked by someone on Twitter in the #SpiritChat community to come back to Twitter and give my two cents about the best way to help.

The discussion here seems to be of two mindsets.  There are many who don't want to pay the overhead of the Red Cross and want to contribute funds so that the maximum amount reaches the widest possible recipients.  The Community Board initiative has recommended the Stephen Siller Tunnel To Towers Foundation.  Please be sure to specify T2T for Hurricane Sandy Relief, if donating. I had heard about the foundation from the Tunnel2Tower runs and more recently, on a local CBS news report where the man was saying that the funds go directly to those in need - and quickly.  In addition, a friend also reported that the foundation was mentioned in a CNN report.

The other way being mentioned is to hand deliver cash or cash cards (American Express, Visa or Mastercard) to the victims themselves, giving them the power to decide how best the money is used. Unless a person knows someone in the area who can deliver it, this method requires that people put their trust in someone to collect the cards and deliver them.  If anyone who knows me wants to do this, please contact me at: barbara@spiritedstrides.com and I will let you know where to mail the cards, which I promise to deliver to the people who have organized the Community Board volunteer efforts.

On a final note for today, it was a very sunny day. It was quite beautiful, but cold. The sun was shining during the day, but the cold could be felt to your bones, especially if you don't have heat in your home. 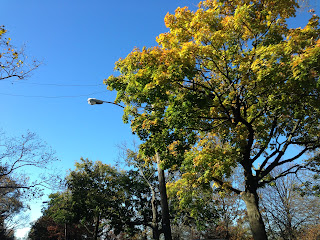 Normally, temperatures in the 30's are not that bad, but without power and heat, it can feel frigid.  There are still many people without power and heat and the forecast is calling for a possible Nor 'Easter on Wednesday.  And while today there were "warming centers" open during the day by the city, I keep hearing reports that some people are afraid to leave their homes for fear of losing their possessions to looters.
And with that thought, I'm reminded that possessions can be replaced, but human life is precious. And animal life is precious, too.  I can appreciate all the people and pets that survived, the efforts of the people in this community in responding to this force of Mother Nature, the people from outside of NYC who are here serving lovingly, the government (made for and by the people) who are providing much needed services, and I'm definitely counting my blessings from this week that Sandy visited. May God bless each and every one of us in remembering that it's the human touch that warms our hearts, that pets are also part of our families and it's the relationships that truly matter in life. No amount of "goods" can replace the joy of members of our family: our human and/or pet family.
We use cookies to improve user experience, remember your preferences, and analyze website traffic. By continuing to browse this website, you consent to our use of cookies as outlined in our Privacy Policy.