Another Look At Rubblebucket Brass 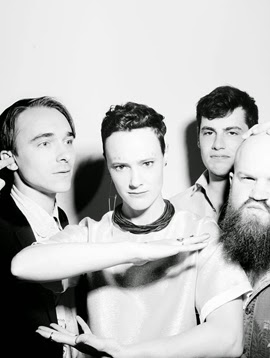 With the release of the Tiny Desk Concert series via NPR Music, it seems more than fitting to give Brooklyn-based Rubblebucket another listen. Those who do will not be disappointed. The Tiny Desk version of Carousel Ride provides a smart and smashing introduction to anyone unfamiliar with the quirky alternative pop exuberance and big band swoop of their music.

As off putting as that may sound to read, the party-friendly attitude of this band — made possible by as many as a half-dozen players — is surprisingly addictive as Kalima Traver sings her cleverly wrought lyrics and her founding partner Alex Toth plays the trumpet, flute, or whatever is handy.

It has been this way since 2009, when the original duo met up while attending the University of Vermont and decided to stick with the band after graduation. It wasn't long before they were joined by by Adam Dotson (trombone, euphonium, vocals), David Cole (drums) and Ian Hersey (electric guitar) to release a self-titled album.

Carousel Ride and the band's last album, looking back.

What the Tiny Desk version of Carousel Ride does that the original release didn't explicitly capture is an unforgettable intimacy as you lean in to listen to the words rather than allow the studio cut to simply wash over any understanding. Traver's vocal delivery notwithstanding, the song becomes as painful as it is beautiful as the artist always intended internally.

Once you've listened to the concert series cut, returning to the studio version makes the entire listen different as if you are somehow informed by the artist like never before. It only makes sense to feel that way. You really are informed by her and the band.

Carousel Ride isn't the only striking song included in the concert series. The band also perform On The Ground and Sounds Of Erasing. On The Ground, which is the opener of the studio album, plays almost like a pleading prayer to higher forces that mortals are fragile things. Don't shake us too much. Most of us are already damaged goods but she delivers it with a love of life nonetheless.

The other track, Sounds Of Erasing, is a clean slate story about being human and erasing all the demons that most of us carry around with ourselves. Traver splits the difference between making it sound heady and hopeful. On the studio version, the composition is a dynamically charged rollick.

The balance of the album drift in and out of alternative pop and art noise. The band occasionally relies too heavily on the synth and sound effects, never realizing how much more powerful their sound can be stripped down and laid bare.

When they do keep it simple on tracks like Shake Me Around, Origami, and portions of My Life, they have more impact. But they might know that now. The band is giving up a free download of an acoustic version with any pre-sold concert tickets for this year's springtime tour.

All together, the album becomes sort of a heady celebration of life, made poignant by Traver's own life experiences. She is a recent cancer survivor. Right on. Not all the brass in this band are horns.

Survival Sounds By Rubblebucket Picks Up 6.7 On The Liquid Hip Richter Scale.

Survival Sounds is the third full length by the band, but their first label release. The band is well worth the investment, keeping them alive to continue producing a unique sound that touches people who are down, relates to them, and then lifts them up regardless of it all. Not many bands do that.

You can find Survival Sounds on Amazon or download it from iTunes. For more news and updates, hook up with the band on Facebook. They are currently playing the homemade acoustic version of Young And Old on their page. Like the Tiny Desk concert cuts, it opens up a whole new way to think about this band.