April Fools - The Jokes On You

Who invented the April Fools Joke? 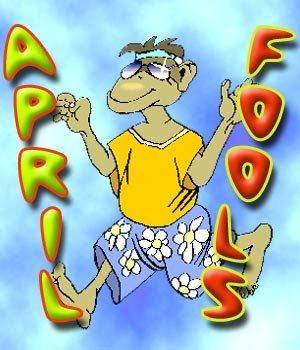 Here's how Wikipedia encyclopedia defines it.

"April Fools' Day or All Fools' Day, although not a holiday, is a day celebrated in many countries on April 1. The day is marked by the commission of hoaxes and other practical jokes of varying sophistication on friends, family members, enemies, and neighbors, or sending them on a fool's errand, the aim of which is to embarrass the gullible. Traditionally, in some countries, the jokes only last until noon: like the UK, Australia, New Zealand, Canada and South Africa, someone who plays a trick after noon is called an "April Fool". Elsewhere, such as in Ireland, France, and America, the jokes last all day."

So as I woke up this morning, my neighbor told me I had a flat tire and of course this is as I am already running late for work. I panicked and then he remarked, "April Fool's." I remember my mother calling me every year when I was a teen and telling me that the boy I happened to be in love and waiting to hear from, she would say "he called, and I just missed him." Seems I just keep missing him to this day! haha

At work, 5 people told me they were all going on vacation and needed their vacation paychecks today and another two told me they quit. My boss doesn't have that sense of humor for me to have walked in and said, "I Quit" so really I didn't get to play a trick on anyone, but....

IT IS WHAT IT IS
and I am grateful that my tire was good, I still have a job and my mother can still call me and provoke an April's Fool joke out of me.