Are we really that different? 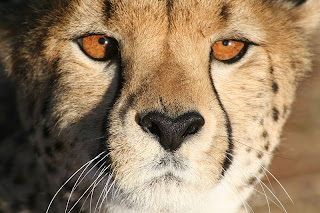 A cheetah at the Cheetah Conservation Fund, Otjiwarongo, Namibia. By William J. Sullivan

I have been changing the way I look at art, mine in particular, and every so often I see something that influences my thoughts about panting, photography and our place in the world as artists and human beings.

I am largely a landscape painter and I aim for realism. But after watching some incredible photography in HD, I wonder if that 'painting what I see' kind of realism misses some mark when photography today can record the landscape. Should we as artist's in paint, be adding something to that - something that just by looking we don't always see? On Artscapes I have a recent post on the subject of visionary art.

Last night I was watching the Discovery Channel and they were airing the first part of the series in HD, "LIFE". The habits of some of the animals when it came to food gathering and hunting were startling. The feeling was not so much about how unique they are, but, rather, how similar. The dolphins created mud 'nets' and fished in cooperation; the use of tools by monkeys to open up the husks of oily seeds....

What was most amazing to me were the three male cheetahs hunting in tandem. (see video below) When I think of our ancestors and how they took down large animals, the need for cooperation in order to survive was paramount... and not what I expected to see in cheetahs. And what was more amazing to me was what I perceived as relief at the end.

After watching a harrowing chase and takedown of a female ostrich, requiring the weight and the energy of all three cats, the danger was still evident when the giant bird was on the ground. The cheetah holding the dying bird's neck lay quietly with his eyes closed to avoid the kicks until they began to subside. When it was clear the ostrich was finished, the cheetah was panting and he opened his eyes to be sure the battle was done and then slowly closed them again as if to express his relief and exhaustion. The look on the animals face that lasted not even seconds stayed with me for hours and burnt into my mind.

We have such a wrong view in our society that large predators are cold and mindless hunters. If even a trace of that view had remained in my subconscious, it was banished forever. The video attached is specifiaclly the cheetah chase. The link below is to the Discovery Channel. If you have the opportunity to watch "LIFE" on Discovery or the BBC, do so!

LIFE on the Discovery Channel