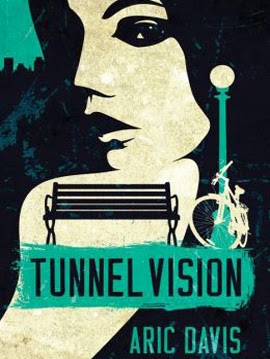 Author Aric Davis returns to his roots in Tunnel Vision — writing the next chapter in the life of his preteen-now-teen protagonist who grows marijuana, blackmails pedophiles, and works as a back alley private investigator to make ends meet. Think of him, Nickel, as an anti-hero for young adults.

He is a kid who escaped horribly abusive foster parents after getting caught up in the cracks of the system. Nickel isn't his real name, which is a composite of Nick and Eleanor. He created it to remind himself of two foster kids he helped save, something to soften his hard edges as he is no saint, sort of.

Author Aric Davis created Nickel during a dark time in his own life, shortly after three members of his wife's family were killed by a drunk driver. Since he couldn't exact revenge on the driver himself, he created a character who, despite his age, would be willing to take them on instead.

While the book has been billed as a hard-boiled crime mystery, the descriptor is better left to Nickel Plated, which was his debut. Tunnel Vision is much more linear in its presentation and Nickel feels significantly softer — not harder — despite the terrible things he has done to some very, very bad people. He is surprisingly well adjusted and his home utterly unscathed since his recent detention.

He shares this story with two teenage girls, Betty and June, who are at the heart of what becomes a new case for Nickel. No, they don't hire him to solve the 15-year-old murder of Mandy Reasoner. The victim's sister, who also happens to be June's mother, Claire, hires him. But what she doesn't know is that Betty and June have taken on the same case after Betty accidentally discovers a connection.

That connection is Duke Barnes, the man who was convicted of the murder 15 years ago after he confessed to the crime. After the conviction he didn't think would stick, he retracted his statement as made under duress and other inconsistencies in the case came to light. The combination landed like a one-two punch, sparking a "Free Duke Barnes" campaign, which has since grown into a blaze among the Michigan punk rock crowd that he and Mandy used to be members of before becoming junkies. 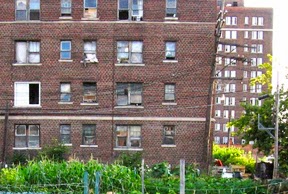 While Betty and June take it upon themselves to discover why her family has kept the murder a secret all these years, Nickel is also digging around to discover whether or not Barnes is guilty or innocent. His reasons are a bit different than the two girls. Claire hired Nickel to protect June, who bears a striking resemblance to Mandy, in the event the real killer is still at large or Barnes is guilty but freed.

The story is so straightforward that it could almost be classified as an amateur private investigator procedural with a budding but almost unbelievable teen romance baked in for good measure. With the girls not all that likable as borderline ditzy punk girls (one of whom drones on and on about being in a two-mom household) and Nickel in mid-transition between bad boy and dark knight, it feels like a holdover for Nickel Plated fans but a pullback from the author's other work.

A quick recap on the career of author Aric Davis. 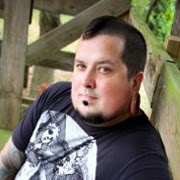 Aric Davis is former tattoo artist and body piercer who began writing his second novel, Nickel Plated, in the back of a tattoo shop between customers. His second and arguably best work, A Good And Useful Hurt, helped him become a full-time writer who took readers on an adventurous revenge story in Rough Men and a haunting abduction story in The Fort.

Tunnel Vision brings Davis full circle with tighter, choppier prose but with seemingly less grit than his earlier work. While it would probably be worthwhile to read Nickel Plated before Tunnel Vision, the new installment is still an interesting outtake in the author's career. He lives in Grand Rapids, Michigan.

Tunnel Vision by Aric Davis Closes In At 5.1 On The Liquid Hip Richter Scale.

Tunnel Vision is entertaining, especially for those who already have an affinity for Nickel and want to see him develop into a bad boy private investigator series. It's both plausable and possible, provided Davis remembers to keep the cards closer to his vest as his stories play out, that his more laborious moments aren't as obvious, and that Nickel doesn't become too settled at the expense of conflict.

You can find Tunnel Vision by Aric Davis on Amazon or download it as a bargin audiobook from iTunes. The audio version is narrated by Mick Podehl, Kate Rudd, and Amy McFadden. The three voices help differentiate three distinct points of view: the first-person account from Nickel, third- person account from Betty, and the diary entries of Mandy. You can also find Tunnel Vision at Barnes & Noble.