As Low as It Can Soar 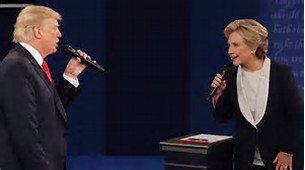 I was watching the second presidential debate last night, mostly with my mouth wide open in disbelief. It was a sobering moment. Was I watching a presidential debate or an Opera show in suits?
But there was one moment of near inspiration. It was when Clinton said: “When I hear something like that, I am reminded of what my friend, Michelle Obama, advised us all: When they go low, you go high.”

Now I was expecting her to soar to heights and raise the debate from the gutters. But she continued:

“He [Trump] never apologized to Mr. and Mrs. Khan, the Gold Star family whose son, Captain Khan, died in the line of duty in Iraq. And Donald insulted and attacked them for weeks over their religion.
He never apologized to the distinguished federal judge who was born in Indiana, but Donald said he couldn’t be trusted to be a judge because his parents were, quote, “Mexican.” He never apologized to the reporter that he mimicked and mocked on national television and our children were watching. And he never apologized for the racist lie that President Obama was not born in the United States of America. He owes the president an apology, he owes our country an apology, and he needs to take responsibility for his actions and his words.”

Is that really as high as she can go? Is it high as the debate could go? As a US candidate can go. Does she even know what height means? Sorry Michelle if your friend misquoted you. She clearly did not understand what you meant.