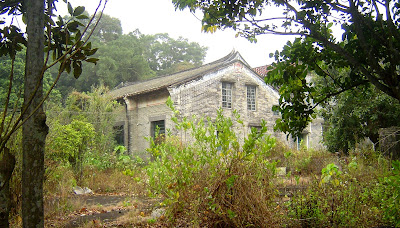 When I posted South Side Story last year, I included the photograph on the right as a typical example of a traditional Chinese house, accompanied by the following text:

The house in the following photo appears to be abandoned, but there is a secure fence around its grounds, so closer inspection is not possible. Like many similar houses, it has painted friezes underneath the eaves and plaster mouldings on the gable end under the roof, but also like many other such houses, these have not been maintained and have faded badly.

However, having been thoroughly drenched while out cycling on Saturday, I decided that a quiet walk would be a better bet yesterday. And because Paula wasn’t familiar with all the narrow paths and alleyways on the south side of Sha Tau Kok Road, this would be a good opportunity to enlighten her.

As part of our itinerary, there was one particular path that I wanted to check out. It had been blocked, illegally, last year, as shown in the following photo: 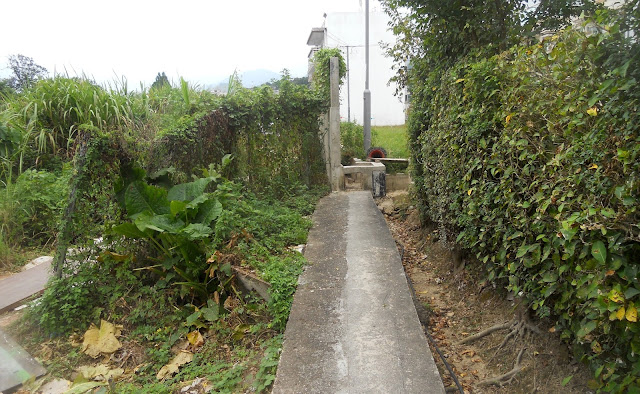 The streetlight indicates that this is a public right of way, but the concrete wall (seen in profile) has been moved to the left. While I was explaining to Paula that I’d lodged a complaint with the Lands Department, a man with a barrow came along and overheard what I was saying. He was extremely aggrieved, because the rudimentary path that has been created to get around the obstruction cannot be negotiated with a barrow, even if the barrow is empty. He had to carry his!

Anyway, this path also leads past the house pictured above, and when we reached the entrance gate, there did not appear to be any impediment to gaining access, apart, that is, from a considerable amount of undergrowth. And that was never going to stop me. I hadn’t noticed it previously, but the characters over the entrance proclaimed the name of the place:

My first aim was to get a closer look at the friezes under the eaves on the front elevation of the house. There are three doors on this frontage, and the next photo was taken from in front of the middle door: 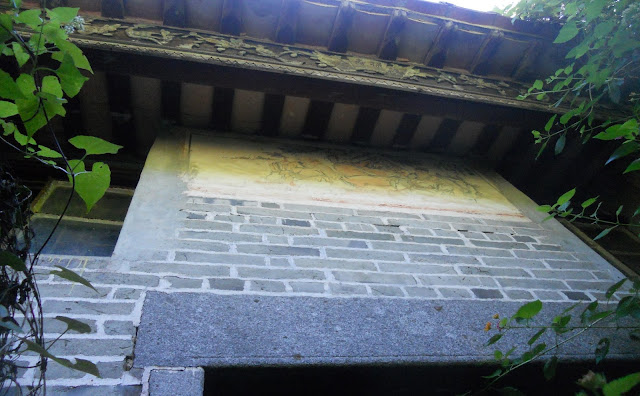 The doorposts and lintel are of an igneous rock that is commonly used in the prestigious buildings around here. Without chipping a piece off, I can’t say definitively what type it is, but judging by the colour it is probably diorite (even though it is described as ‘granite’ where its use is noted in the gatehouse of Kun Lung Wai).

The next photo is of part of the painted frieze above the left-hand door and gives some idea of how elaborately decorated this house must have been in its heyday: 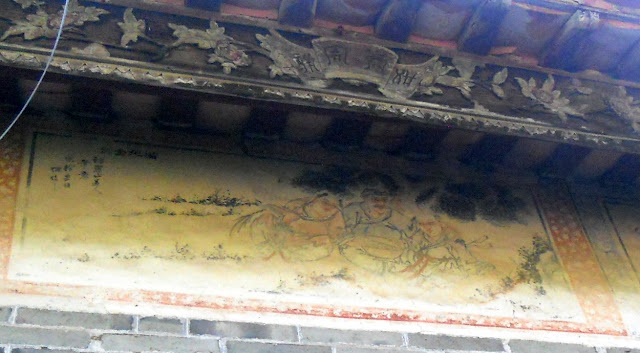 I might have been happy with the last two photographs, but to our surprise the middle door was bolted from the outside but not locked. Naturally, we wanted to see what was inside: 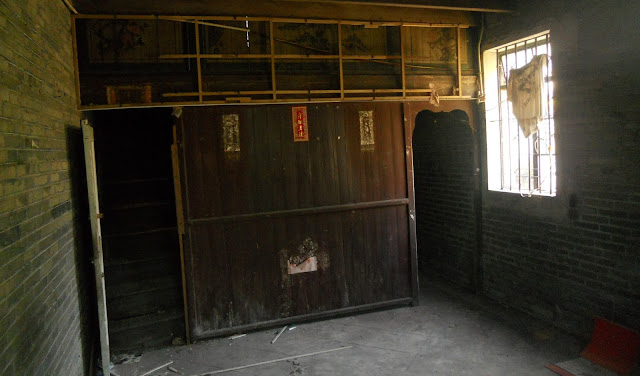 The previous photo is of the room behind the right-hand door. What you see here is just a thin wooden partition. I went through the right-hand opening and found another door leading to the outside. I found myself in a narrow passage between the main house and some kind of annex (shown in the next photo), and it was only after we’d returned home and I’d looked at the photos I’d taken that I realized that we hadn’t taken a look upstairs in the main house. 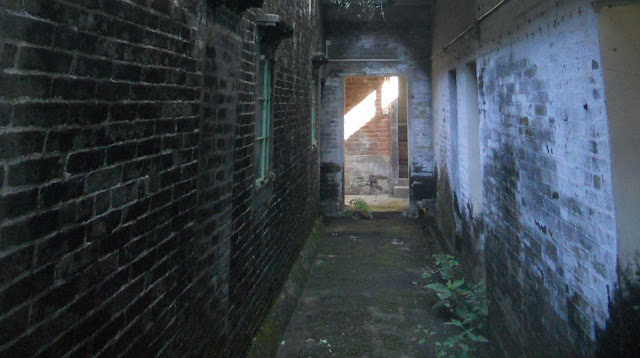 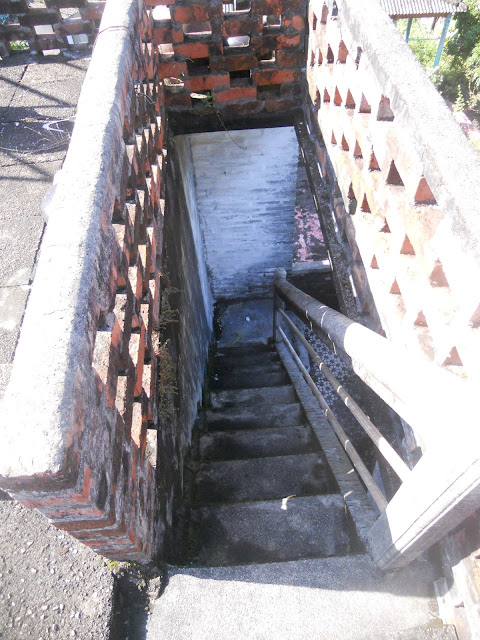 …from where I was able to take this picture of the roof of the main house, an excellent example of traditional Chinese roofing: 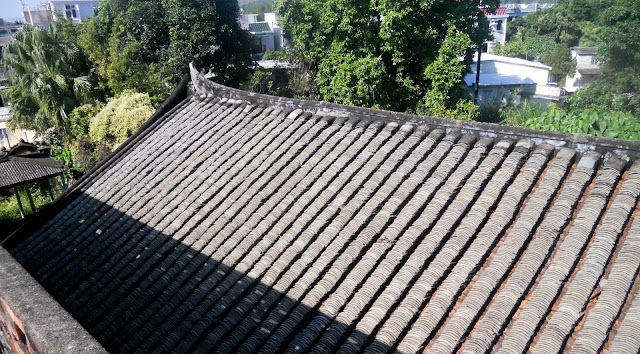 Having seen all there was to see here, we then descended to the open area next to the gable end of the main house so that I could take a look at the plaster mouldings. The first photo is a general view of that gable end, while the second is a closer view of the mouldings at the apex. I’ve no idea what kind of creatures are flanking the central plaque, but I’ve seen them before on other buildings. They look like weasels to me, but the tails are reptilian. 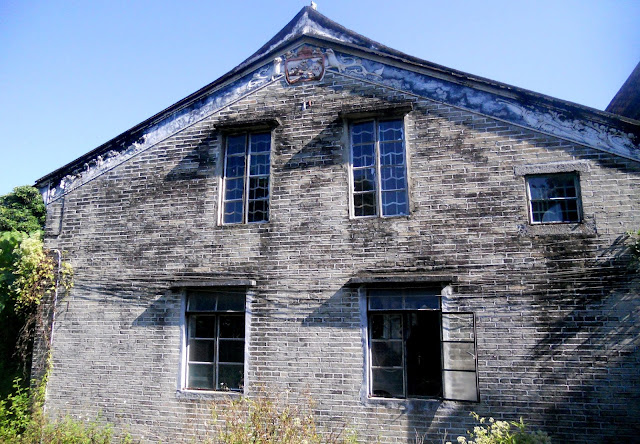 The next photo shows how the main house and the annex are connected, although I would not have included it if it weren’t for the curious rooftop connection to another building: 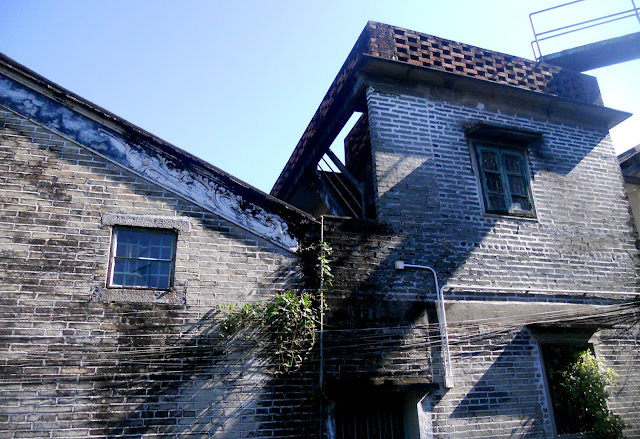 That building is relatively modern—from the style, I would estimate that it was built in the 1960s—and it too was not locked. Of all the things that you do not expect to find in an abandoned building, I would imagine that a harmonium would come very close to the top of the list: 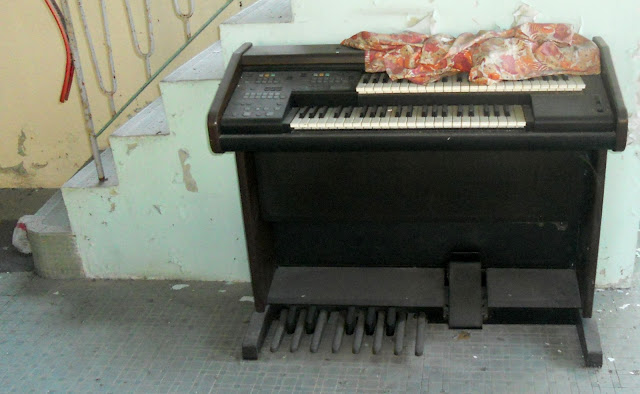 The two framed scrolls on the wall opposite the harmonium might reasonably have been expected. There is a reference to the Buddha, and a date of 1st September, although the year has been recorded in the arcane system that links them to the reigns of particular Chinese emperors, so I can’t provide the Gregorian equivalent. 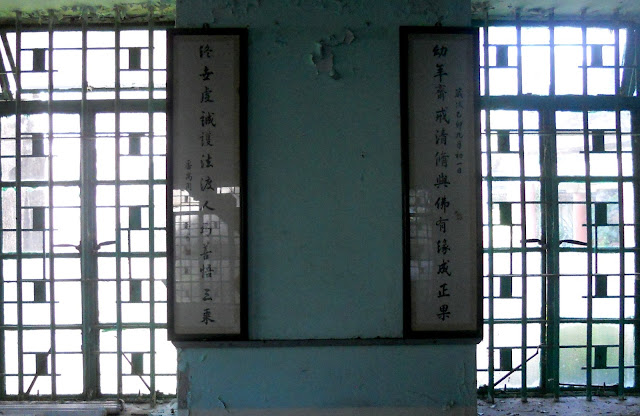 The harmonium and the scrolls should probably have given us a clue, not to mention the octagonal window on the first floor—eight is the lucky number in Chinese culture—but I reckon that nothing could have prepared us for what we found upstairs: 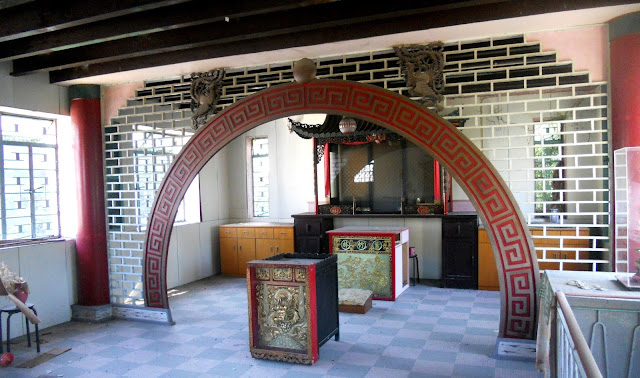 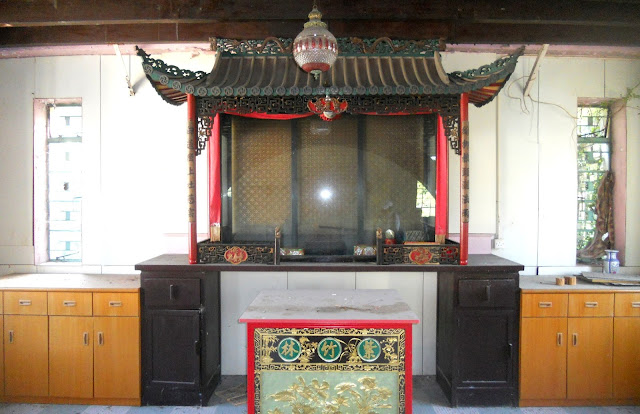 There was only one more thing to check out: the other gable end of the main house. Because of the trees and other vegetation, it wasn’t possible to stand back to get a better view of the mouldings, so the final photo was the best I could do. It appears to be a torch or similar symbol: 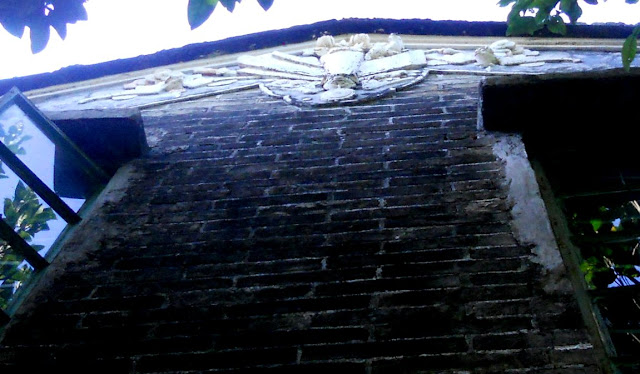 Despite the length of time I’ve spent in Hong Kong, the territory still has the capacity to surprise–and delight—me. And it’s just done it again.