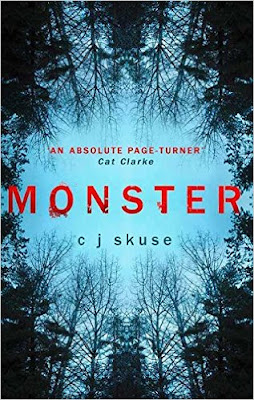 "At sixteen Nash thought the biggest fight she'd have to face would be the battle to become Head Girl of prestigious boarding school Bathory.

Until her brother's disappearance leads to Nash being trapped at the school over Christmas with Bathory's assorted misfits.

As a blizzard rages outside, strange things are afoot in the school's dark, dangerous hallways. and the girls will have to stick together if they hope to survive."

I was on a quick hit & run raid on my local library, grabbing new reading material before scuttling off to get something for my tea, when this leapt out at me.

I realised quite early on that "Monster" is aimed at a demographic I don't belong to - my guess would be much, much younger and lacking in chest hair -  but after some initial scene setting "Monster" sucked me in deeper and deeper as it kept getting darker and more tense.

Without giving too much away, this book might start off as a Girls School Drama but by the end it was a bloody thriller.  It also pulled off the neat trick of repeatedly turning out to be a different book to what I was expecting, all without throwing in unnecessary supernatural elements.

C J Skuse doesn't go overboard with her descriptions. She's better at letting you into heroine Nash's head than letting you know what she looks like and the other characters are also painted in sparse strokes. It works quite well but then again I always prefer it when a writer gets stuck into the story.
I think Skuse also deserves praise for turning characters that should be a total anachronism into interesting, contemporary characters.  Nash and her crew are an interesting lot and I wouldn't mind a sequel or two.

To sum up: A pleasant surprise and well worth my time.