The Beethoven Films – All of them! 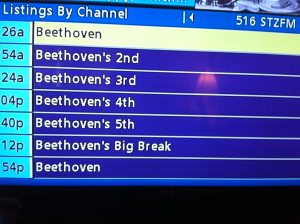 Flipping around the cable directory today, I noticed that some channel is showing all six Beethoven films. Really there are six of these? Is this, like, the end of times? The first two have Charles Grodin starring, but on the third one, it would appear that Judge Reinhold took over. What does it say for your career, Judge, which you had to take over for Grodin on the third film in a series?

By the fifth film it would appear they couldn’t get Reinhold, so someone named Daveigh Chose took over. I have no idea who this is.

And then in the sixth film it is Jonathan Silverman! How is that career going, Jonathan? Still hoping for a third Weekend at Bernie’s film? I just checked him in IMDB and he just completed a film called “Robo-Dog Unleashed”.

Anyway, back to Beethoven, why are there sixe of these. I just check the Beethoven film franchise on Wiki, and apparently there are 2 more of these things? Who keeps making these, and why do they keep making these. Does anyone watch these? Is it just me or is this proof we are living in a Matrix type world, because this can’t real.

God help us all!