blogcatalog
Have you ever given a thought that how our Universe came into be? Our Universe was created in an extremely hot and dense state which expanded at a rapid state and then cooled and it is expanding even now today.The fact is interesting isn't it?

When our Universe came into existence there was NOTHING at all and Big Bang theory gives an explanation to this. 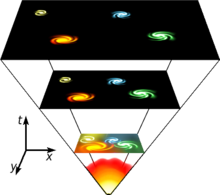 Big Bang theory has been developed by taking theoretical assumptions and observations together by George Lemaitre in 1927 by taking into consideration Albert Einstein's equations of general relativity and proposed and this model was being called "explosion" of a "primeval atom" which later came to be known as Big Bang theory.

According to Big Bang theory after a long period of time the dense matter due to gravitational pull formed stars, galaxies, planets and other heavenly bodies which we find today.

The most common misconception about Big Bang is that we assume that there was an explosion in the Universe but the experts say that there is an "expansion" and due to this "expansion" things in Universe are moving away from us.

There is no evidence of Big Bang theory as there is no explanation to the concept of what could have caused "Big Bang".