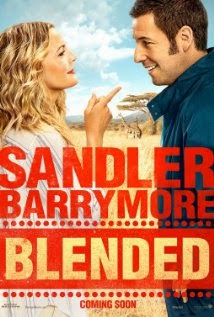 I kind of wanted to call this post "Adam Sandler at 50," even though Sandler is actually only 47.

If you've been here before, you probably know that I have kind of a love/hate relationship with Sandler's work. I think the guy is funny as hell (sometimes), but just when I start enjoying a film, he goes and tosses in an elk peeing in a guy's face and it all falls apart for me.

In my view, Sandler's previous efforts opposite Drew Barrymore represent some of his best work. Both The Wedding Singer and 50 First Dates are on the short list of movies that make me say, "Oh, yeah...that one was pretty good" when I'm confronted in the process of griping about Sandler's obsession with bodily fluids and other middle-school level humor.

But, I mean, there was the walrus vomit.

This film includes everything that's funny and occasionally insightful about Adam Sandler with nary an animal emitting gross materials onto a human being. And, that must have required some restraint, as much of the movie takes place in Africa and there's a wide variety of animals to choose from.

This may come as something of a disappointment to longtime Sandler fans who enjoyed the fart jokes and peeing in the pool, but from where I'm sitting it appears that a talented comic actor.has finally come of age.

Even the potentially annoying elements, such as the chorus of African men who pop in to sing at varying intervals, are so well-placed as to add to the humor.

Bella Thorne, to whom I've previously referred only as "that annoying Disney girl," was charming and beautiful. And, Drew Barrymore was Drew Barrymore.

I thoroughly enjoyed this movie and came out with some hope for the next stages of Sandler's career.