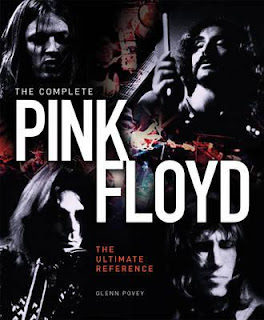 Among the numerous books about Pink Floyd that I've written about on this site, there was one I reviewed a short while back called Echoes which was subtitled "the complete history of Pink Floyd."  It was a thorough day-by-day chronicle of the band's entire existence from the birth of the band members in early 1940s through 2006. It was a chronological record of every recording session, live concert, TV and radio appearance, and record release over the course of forty years and ranks alongside similar books on the Beatles and Kinks as essential tomes for fans of those bands. However, I became aware of a new book called The Complete Pink Floyd from a publisher I was working with on another book; they asked me if I'd be interested and I of course said yes. It's brand new (published in 2016) and by the same author: renowned Pink Floyd expert Glenn Povey. At first glance it looked much the same as Echoes, although much thicker. What, if any, were the differences between the two books? That's what I set out to discover and I'll convey my findings in this review.
***special thanks to Carol at Carlton Publishing for sending a copy of the book to review!***

The first thing I should note is that I was sent a copy of the UK edition of the book...the US edition is the same in every way except for different cover art. Second, from the moment I opened the book it was clear that this is really an updated and revised edition of Echoes. In fact, with the death of Richard Wright in 2008 since the publication of Echoes and the final non-archival releases from Pink Floyd in the interim (2014's The Endless River), The Complete Pink Floyd can be seen more as the final edition of the book. It goes up to the end of 2015 and so includes the additional Pink Floyd reissues and releases since 2006, as well as additional solo releases and live concert appearances from Roger Waters, David Gilmour, Nick Mason, and Richard Wright in the interim. The layout of the book is the same as in Echoes, with each chapter devoted to a year or cluster of years/era from the band's career. Within each chapter, the first several pages are devoted to a write-up describing their activities during that time; after this is the day-by-day diary section describing everything they did during that period. The chapters are accompanied by lots of photographs of the band during those specific eras, as well as various memorabilia, mainly concert posters/flyers and ticket stubs. Many of the entries for concerts include contemporary press reports and reviews to give an idea of how their albums and concerts were received at the time; this is especially beneficial when comparing with the retrospective views on much of their work. Where this updated and expanded edition really shines is in documenting their recording sessions, especially during the early years through their mid-career (~1975). With unprecedented access to the Abbey Road Studios archives, Povey is able to give the most detailed analysis yet of their recording career, detailing every take, edit piece, alternate/working title, and unreleased song they ever worked on. There are even some songs that were lost forever which are finally chronicled. While after a while it all becomes a bit repetitive, it's still very nice to have all of this information at one's fingertips and in one volume.

While this book doesn't really lend itself to front-to-back reading, I did just that the very first time in order to make sure I didn't miss anything. However, this is a book that is best enjoyed when being used as a reference guide for serious fans. Overall, as Echoes was, it's an excellent book although I do have a few criticisms. First, while the photographs are wonderful, there are many nice ones from the previous edition that are now missing (most notably, a shot of Frank Zappa onstage with Pink Floyd in 1969). Second, the narrative write-ups that lead off each chapter are really nice, but large chunks of them are repeated word-for-word during the sections that detail each album and single release; this just seems a bit lazy, but is only a minor criticism. The remainder of the book has extensive discographies of Pink Floyd, as well as the various members' solo releases and is an invaluable guide for any collector or fan. In all, this is the final word on Pink Floyd's day-to-day career and truly lives up to its subtitle as "the ultimate reference." If you're a serious Floyd fan, you need this book.