BOOK REVIEW: Shout! The Beatles In Their Generation 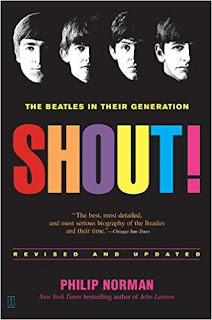 Ah, Shout!...one of the most popular yet polarizing books about the Beatles that's ever been published. While Hunter Davies' 1968 book remains the only authorized biography of the band and is a wonderful time-capsule view of the Beatles from the inside, for many years Shout! was the only extensively researched, definitive, and all-encompassing book about the band's entire career and its aftermath. Author Philip Norman, who should be familiar to any Beatles fan as well as anyone reading my site since I've recently reviewed his Lennon, McCartney, and Jagger biographies, caused quite a stir when Shout! was released in 1981. McCartney took to calling the book Shite! and Harrison had some creative edits when it came to the book's title page, as seen below...
Much of the criticism stemmed from Norman's portrayal of John Lennon as the only talented member of the group, his unflattering portrayals of McCartney (especially), Harrison, and Starr, and his public pronouncements in the media at the time that Lennon was "3/4 of the Beatles" all by himself. It was with this reputation that I first read the book many years ago. I found myself agreeing with those assessments, although I did find Norman's writing style easy and enjoyable to read and the book as a whole fairly entertaining. Since I've reviewed three more of Norman's books and hadn't read Shout! in a long time, I gave the updated edition a fresh re-reading for this review. I was also interested to see if my opinion of the book had changed in the intervening years...
***special thanks to Courtney at Simon and Schuster for sending me a copy of the book to review!***

The first thing to note is that, in his introduction to this 2003 updated edition which centers mainly on noting that Beatlemania never really went away and that, with the deaths of John in 1980 and George in 2001, people were starting to realize they wouldn't always be around forever, he readily acknowledges that he went too far in the original book with his praise of John and his shabby treatment of Paul. The changes made to the updated edition included added material, corrections, and revisions as well as some slightly toned down language when it came to McCartney (George wasn't so lucky). One last interesting note from the intro is that Norman mentions that his assistant while he was working on the book in the late 1970s/early 1980s was none other than young Mark Lewisohn, who of course is now widely regarded as the world's eminent Beatles scholar and who, with the release of the first of his three-volume biography of the band in 2013, has already eclipsed his former mentor as author of the definitive Beatles bio. With that being said, the big question remains: is there still value in Shout?

Norman begins the book, naturally, with the birth and childhood of the Beatles in WWII-era Liverpool, focusing first on John and then Paul leading up to their initial meeting and formation of the Quarrymen. George is brought into the fold and the Hamburg years, Brian Epstein coming on as their manager, and their initial EMI audition before Ringo is finally brought into the picture are all chronicled. The well known story, which I won't bother regurgitating here, is told expertly and in detail that must have seemed to fans and readers in 1981 the way Lewisohn's work is now regarded. As always, Philip Norman's prose flow nicely and is pleasing to read, regardless of the content. However, what of the content and tone? I will say that, at least to my eyes, he seems to have toned down the countless swipes at Paul, although there are still numerous subtle digs sprinkled throughout the book. I'm not going to go through the story as it's been told, told, and told again innumerable times, but overall Norman does a good job in giving a high-level and fairly (though not completely) accurate telling of their story. He hits all of the important points and squeezes in enough nuggets of info to satisfy most fans...these bits of info, which seem passe now, must have been revelatory when the book was first published in 1981. However, there are many instances where Norman is flat-out wrong and while the inaccuracies are mainly minor and often inconsequential, for seasoned Beatles fans, they'll be pretty obvious. Among them are his assertion that George wrote "Only a Northern Song" specifically for the Yellow Submarine soundtrack (he didn't, it was originally written and recorded for Sgt. Pepper a year earlier), that John and Yoko were dressed all in white when dancing to "I Me Mine" in the Let it Be film (a quick look at the film shows them both in black save for John's purple shirt and white sneakers), that the final photographs of Brian Epstein were taken at the recording session for "A Day in the Life" (they are in fact from the "All You Need is Love" sessions almost four months later), calling Paul's first drummer in Wings Danny Sewell (his name was Denny), and several others. While on the one hand it's nice to read a Beatles biography that covers all of the important events without getting too bogged down in minutiae, on the other it's frustrating that when Norman does try to reach a bit and include finer details, he often gets it completely wrong. Again, for the casual Beatles fan these will go either unnoticed or pass without concern, but for those of us with an in-depth knowledge of all things Beatles, such things will stick out like a sore thumb.

After the end of the Beatles' career, Norman briskly covers their solo careers up to and including John's murder in 1980. For this updated edition, he has also added material covering Paul's knighting and the death of his beloved Linda, and George's death from cancer in 2001, bringing the story into the 21st century. It's here where his nastiness toward Paul and George, in particular, shine through loud and clear, and it's interesting that while he seems to have toned down his bias for John and against the other three in the main book, the newly added material in the update brings it back with a vengeance. From subtle swipes at Paul as "showbiz Paul" to the final say on George as being "just an average guitarist who got very lucky" and that the reactions to his death were completely over the top, it's clear that while the main text of the book seems to have softened up a bit, the underlying bias is still there. It's especially fascinating having recently read and reviewed Norman's recent comprehensive McCartney biography in which he seems to have realized the error of his ways and done an about-face. I'm not holding out any hope that a subsequent Harrison volume will be following soon, though!

So in 2016, is Shout! still a worthwhile book? My answer is a qualified "yes," and allow me to elaborate. As a thorough, well-written, and reasonably detailed biography on the Beatles, it was up until 2013 the best book on the band's overall career (since Hunter Davies' book ends in early 1968, when it was published). For casual Beatles fans, it's probably still the best and most accessible book even with all of its faults. It's miles better than most of the myriad other shoddily-written bios that have cropped up through the years, including the putrid biography by Bob Spitz from several years ago (I won't elaborate any more as that could take an entire post in and of itself, but wow...do I despise that book).  However, with the publication of Mark Lewisohn's first of three volumes of his ultimate Beatles biography, for truly serious and obsessive Bealtes fans such as myself Shout! is now obsolete. It's still worth reading and has its merits, but it should no longer considered definitive in any way. The more I think about it, I'm not sure if Norman truly toned down the John worship and Paul and George bashing or if it just seems a bit less harsh that it used to when I first read the book years ago, but I do think at present that the bad reputation the book has in the more dedicated quarters of Beatles fandom is still a bit over the top. It has flaws, absolutely, but it's also pretty good in a lot of ways. If you're a new, casual, or moderate Beatles fan, this book is definitely worthwhile, and if you're a hardcore fan, you'll probably have already read it and can make up your own mind. For me, it's no longer my go-to Beatles bio, but still one I'm fine owning and reading every once in a while.