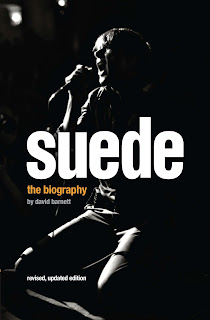 As one of the most legendary, important, and successful bands to come out of the 1990s UK music scene, Suede exploded in popularity in 1992 before they ever released a note of music, simply via word of mouth and their electrifying live performances. Propelled by the songwriting team of singer Brett Anderson and guitarist Bernard Butler, the band was at the peak of their powers before it all spectacularly fell apart in 1994. Regrouping with a teenage fanturned new guitarist and an added keyboard player, the band reinvented themselves and reclaimed their place as one of the top UK bands of the 1990s before dissolving amidst some bitterness in 2003.  A surprise reunion for some gigs in 2010 led to yet another phase of their career which, two new albums and numerous shows later, shows no signs of abating in 2016. Author David Barnett, a longtime fan and former employee at the band's offices, originally wrote their authorized biography, entitled Love and Poison, which was published in 2003 right at the time of their split. The defining book on the band, it was suddenly out of date when the band got back together; luckily, Barnett revised and updated the book for a new edition in 2013, and it is this new version that is the subject of the following review.
***special thanks to Carol at Carlton Books for sending me a copy of the book to review!***
Drawing on extensive interviews with all of the band members, managers, producers/engineers past and present, and countless diehard Suede fans, David Barnett weaves the tale of a band that began with two lower class boys from an undistinguished London satellite town in the early 1980s. Brett Anderson grew up in a poor and eccentric family, falling in love with music during his childhood and plotting his escape from a town where nothing seemed to happen. Along with childhood friend Mat Osman, Brett dreamt of being in a band and using music as a vehicle for success and transcending class. After a brief stint at university in Manchester, he transferred down to London and formed a band with his new girlfriend Justine Frischmann and Mat. After putting an ad in the music papers for a guitarist, Bernard Butler joined and the songwriting partnership that would fuel Suede to success was born. These early years were marked by a lot of hard work and self-belief, albeit with little success to show for it. Justine eventually splitting with Brett and taking up with Blur's Damon Albarn inspired Brett's lyrics to take a darker, more personal turn and her leaving the band right after drummer Simon Gilbert joined had a galvanizing effect on Suede. However, after their initial run of acclaimed singles and their first two albums, things came to a head and Bernard Butler left the band in mid-1994. Bringing in new guitarist Richard Oakes (then only 17 years old) and Simon's cousin Neil Codling on keyboards, Suede reinvented themselves and went on to another era of success before limping to their end in 2003.
Suede's comeback in 2010 was the impetus for a revised and updated edition, and this has been done in a rather unique way. Instead of simply tacking on a chapter at the end or cutting and inserting whole swaths of text throughout the book, Barnett went through the entire book and extensively annotated it with footnotes. These serve to not only bring the story up to date, but use the benefit of hindsight to reflect not only on his writing style, but many of the people and events referenced, bringing them all up to date. Additionally, numerous longtime Suede fans, many of whom went on to become friends and employees of the band, share their insights in these footnotes which, in keeping with Suede's music and fan community, serves to further include the reader into the Suede family. It's hard to explain, but if you're a Suede fan and you read this book, you'll know what I mean. What was a bit shocking, though, was how disdainful a few of the fans repeatedly quoted throughout in the footnotes were toward the band...a couple of them in particular came off as quite antagonistic and dismissive of anything the band has done since 1996 or so. The honesty, especially in an officially-sanctioned book, was refreshing, but also a bit eye-opening as it wasn't what I would've expected! While most of the text in the actual book has remained unchanged, all of the corrections and clarifications are made in the footnotes. Initially, I thought this would made the book cumbersome to read, but it didn't in the least. Even better, there were some genuinely funny and laugh-out-loud anecdotes from Barnett that really helped to show one of the things often lacking in discussions of Suede: their humor. The additional information also bolstered Brett's assertion on the inner book jacket at how ridiculous and surreal so much of the band's history has been. However, it's nice to read that for all the drama and controversy throughout their career, they've all remained relatively grounded and come out the other side intact, still enjoying each other's company to continue making great music. As the author rightly pointed out, no one has ended up dead or in prison and for that, all involved should be thankful.

Sandwiched in the middle of the book are two sections of photos, including many from the personal collections of the band. Most fascinating are the ones showing the band in their younger days, especially in their early five-piece incarnation. The only person who declined to contribute to the book was, sadly, the person I and most Suede fans probably wanted to hear from the most: Bernard Butler. While Barnett did meet with and interview him, Bernard asked that none of the material be included in the book. The only contributions from Butler therefore come from previously published interviews he'd done with magazines and newspapers in the past, and while the author does an admirable job trying to present Butler's side of the story when it comes to his split with Suede, one can't help but be wistful as to how much more informatively it could have been done had Bernard consented to his involvement in the project. This is especially true when considering Brett and Bernard's 2005 reunion band and project, the short-lived but excellent The Tears. In fact, the book overall feels a little Brett-centric, which is understandable as he's been the face, voice, and only continuous creative force in the band throughout its history (with apologies to Mat and Simon, who of course have been in the band from the beginning, but don't write or sing any of the songs!). In places the book almost does feel like a biography of "Brett Anderson, member of Suede," rather than the band Suede itself, but their histories are obviously one and the same, and Brett's various tribulations so entwined with the band's fortunes that it's unavoidable. My one and only glaring complaint with the book is that it feels as though the bringing it up to date with the footnotes feels a bit rushed, falling a bit short at the end. The final chapter, describing the band's 2003 split as it did in the original addition, is supplemented with a couple of extended footnotes bringing the story up to present. However, it does this is a very general sense...what I would've liked to have seen is one final, added chapter to bring the story up to date in a more fleshed out and detailed manner, including the whole saga of the Tears and what led to the 2010 reunion and the new albums. That would've made the book even better than it already was. However, David Barnett's Suede biography is a book I've read several times since 2003 and one that lends itself to repeated readings. If you're a fan of the band, their music, and the impact they had on the UK music scene of the 1990s (as well as their later career renaissance which continues to this day), then this book will be endlessly fascinating and absolutely essential to you.