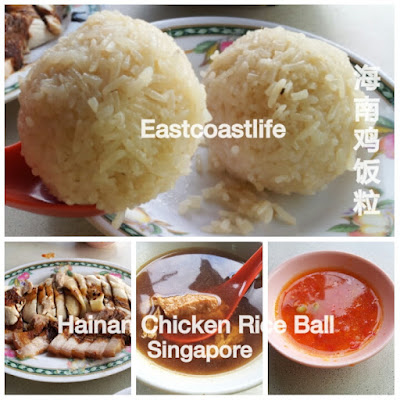 It took me more than two years before I ate at Hainan Chicken Rice Ball, located in Shin Boon Hwa Food Centre. I have noticed this chicken rice stall when I dined at the coffee shop's zichar (Chinese food stall selling ala carte dishes) stall several times. The chicken rice stall had already closed for the day when I went there at night.

I was looking for a traditional cafe in Queens Street on Thursday afternoon, and Google brought me to the wrong end of the street. Since I was in the area looking for a place to have my lunch, I remember this chicken rice stall and decided to check it out.

I rarely eat chicken rice outside my home as I can cook an authentic and excellent Hainanese chicken rice, the family recipe is passed down from my late father-in-law. 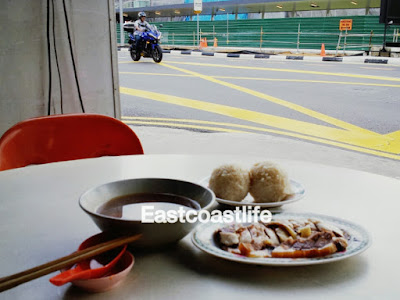 I ordered a chicken rice ball set (S$4.50) which consists of two tennis ball-sized chcken rice balls, a plate of chicken and braised pork belly slices, plus a bowl of soup with two slices of tau pok (beancurd puff).
When I first bite into the chicken rice ball sold by Mr Ba, the 3rd generation owner of Hainan Chicken Rice Ball, I was elated. The chicken rice was fragrant, non-greasy and you could see the grains of rice even though they were kneaded into a ball!
I thought the chicken was overcooked, it is drizzled with dark soy sauce instead of the usual light soy sauce.

I had ordered a glass of iced milk tea and when the elderly waiter came to collect my empty glass after my meal, he pointed to my untouched bowl of soup and advised me to drink it. "It's good stuff!"

Turns out the bowl of soup was boiled with ingredients like danggui (Chinese angelica), bay leaves and peppercorns. I gladly drank it all up.

The friendly Mr Ba was extremely proud of his yummy chicken rice balls when I approached him to chat. He happily demonstrated to me how he moulds them. 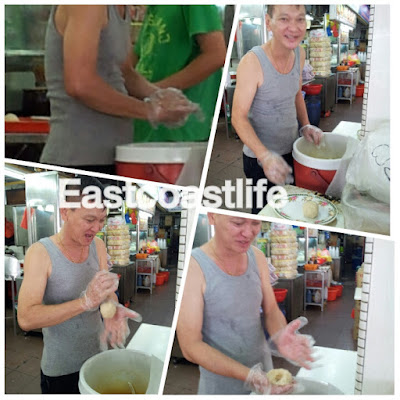 Mr Ba hand kneads the chicken rice balls when a customer makes an order. He showed me the kitchen where he cooks his chicken rice in a big pot on a gas stove, and he has been cooking his rice using the traditional method for the past 33 years! He doesn't use an electric rice cooker to cook his fluffy chicken rice. 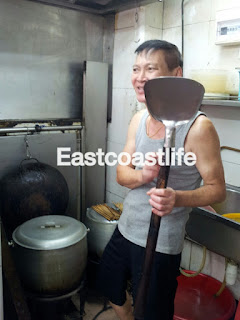 He then showed me his giant stirrer which has been with him for more than 30 years. It is custom made to stir and fluff his chicken rice. 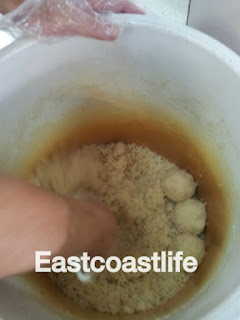 Mr Ba uncovered the lid of the rice warmer where he keeps his piping hot chicken rice. He lightly fluffed the rice several times with a rice paddle to show me the tender rice grains that hold their shape and didn't stick together.

According to a Hainanese elder, the Hainanese in the old days used to mould rice into balls so that they are convenient to hold and eat when they work in the fields and especially when they had to climb up the mountains to pray to their ancestors during the Ching Ming festival.

Mr Ba's grand uncle started selling chicken rice 92 years ago. He would walk the streets balancing the cooked food in two baskets on his shoulders. Years later, he saved up enough money to buy a cart.

It was then passed down to Mr Ba's mother. He took over the stall when he was 24 years old. He rented a stall in Jalan Besar and eventually moved to this present address. He is now 57 and does not need to work long hours as his four children are all grown up and are professionals in their respective fields. They are unlikely to take over his business. 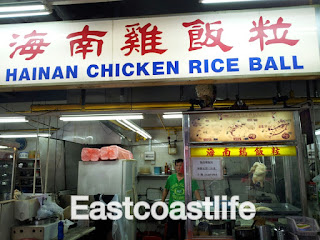