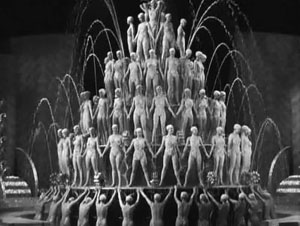 He really took off when Ruby Keeler, via a single cut, moved from tapping in front of a painted backdrop to dismounting from an actual cab on a three-dimensional set of 42nd Street, complete with traffic, mounted police, and hundreds of dancers, all in character – but that was only the beginning. Dance director, choreographer, auteur… and visionary. In his heyday, Busby Berkeley (1895-1976) mounted a series of still must-be-seen-to-be-believed musical numbers (most in lustrous black & white) that included overhead shots of dancers forming mind-boggling kaleidoscopes; fifty-six white grand pianos rolling around the stage in patterns; scores of chorus girls playing neon-lit violins in the dark; a camera tunneling through the gams of tightly-muscled dames; a Technicolor dream with Carmen Miranda sporting a 50-foot fruit basket – all enough to send a hardened surrealist’s head spinning. 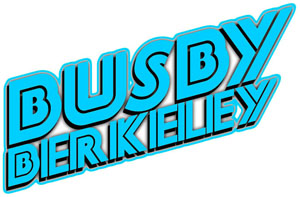 Says Bruce Goldstein, Film Forum’s Director of Repertory Programming, “Berkeley was the first to realize the endless cinematic possibilities of the musical form. Imitators have never even come close to what he created in the early 30s – not even with tools like CGI.”

Berkeley was born to an actress mother in Los Angeles and first performed on stage at age five. After a stint in the army during WWI, he began his career as a dance director and choreographer, working on nearly two-dozen Broadway shows. His film career began with producer Samuel Goldwyn, but he became a household name with his a string of iconic successes at Warner Bros.: 42nd Street, Footlight Parade, Gold Diggers of 1933, and many others, featuring one astounding production number after another.

In addition to his work as a choreographer and dance director (though neither title does justice to what he actually did), the festival also includes features films entirely directed by Berkeley, including Gold Diggers of 1935 (featuring the spectacular “Lullaby of Broadway” number); Hollywood Hotel (which introduced the song “Hooray for Hollywood”), the Technicolor extravaganza The Gang’s All Here, with Carmen Miranda sporting the world’s largest fruit basket; Strike Up the Band and Babes on Broadway, both featuring Judy Garland and Mickey Rooney; For Me and My Gal, with Garland and Gene Kelly (in his debut); Take Me Out to the Ball Game, with Kelly, Frank Sinatra, and Esther Williams, and written by Betty Comden and Adolph Green; and a rare non-musical, They Made Me a Criminal, starring John Garfield, Claude Rains, and the Dead End Kids. Most films in the series will be screened as part of double features (two films for one admission), and most of the features will be screened in archival 35m prints.

December 7, the opening day of the festival, is the 75th anniversary of the attack on Pearl Harbor. In addition to the Berkeley double feature that day, Cavalcade of 1941, a vintage short including FDR’s famous “date that will live in infamy” speech, will be screened.