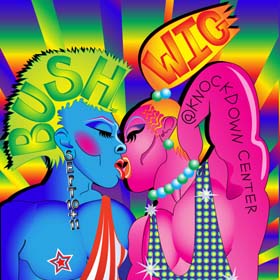 BUSHWIG is holding its fifth annual festival of drag, art and music this year (Saturday, Sept. 10th and Sunday, Sept. 11th) at The Knockdown Center (52-19 Flushing Ave, Queens), a departure from Bushwick–the Brooklyn neighborhood that inspired the name of the event. Since its creation 5 years ago by Brooklyn artists Horrorchata and Babes Trust, BUSHWIG has pulled an international audience in and has curated lineups with some of the most well-respected names in the alt-drag community. Bigger names are set to perform and larger crowds are expected to show this year at the new venue. Headlining acts this year include legendary Lady Bunny and RuPaul icon Latrice Royale with music from Tim Sweeney (Beats in Space), with even world renowned artist Wolfgang Tillman on deck duties!

The ambitious programming for this year includes art installations, projection art mapping, international DJs, live music and diverse food offerings on top of more than 150 drag performances. At BUSHWIG 2015, Lady Bunny (close friend to world renowned RuPaul, who has brought drag to the mainstream), handed off ‘the torch’ to Horrorchata–symbolic of passing the legacy of drag down to a new generation of NY performers. The festival is going on strong as it marks its 5th anniversary and continues on to becoming an NYC iconic event likes its predecessors (Studio 54, Warhol’s Factory, Wigstock, etc) while also engaging a wider and more diverse audience.

“Right now we are in a drag explosion. BUSHWIG is part of this revolution; the new wave of drag and the next generation of queens. The creativity in New York is always evolving and what really matters is the art will always be here. We are beyond excited to celebrate our fifth year,” said Horrorchata, co-founder of Bushwig.

BUSHWIG takes great pride in being a celebration of anyone for everyone. Founded by a group of artists deeply involved in the Brooklyn drag scene, the festival provides a creative safe space for everyone to get involved. The drag community has grown immensely as television show RuPauls Drag Race, just nominated for three Emmy Awards, has brought it to the mainstream. The festival functions first and foremost as a community event, giving all a part of the stage and an opportunity to get involved. The artists at BUSHWIG travel far to showcase their very best work, with some acts traveling from Europe. The festival was founded in 2012, its original lineup had 60 acts and 5 years later, more than 150 acts will perform this year during the two-day festival.

Watch videos HERE  of past  performers!