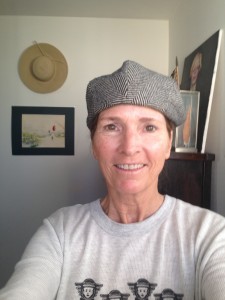 I can just hear you out there…”Wow, the lengths some people will go to get medical marijuana.” The fact is, when you live in California, where most of the loose nuts and bolts found refuge in the 60’s, they pass out cannabis cards like free samples at Costco.

So, here’s what happened…

Like a lot of women my age, I’d stumbled into menopause, and all systems seemed to be shutting down nicely. A year went by and suddenly I was bleeding again…and not just a little. Thirty-three days worth. By the time I went in to see my general doctor I was feeling weak. She recommended I go to an oncologist. During that visit, the new doc advised a hysteroscopy to take a sample of the uterus and remove the lining, which would hopefully stop the bleeding. That seemed like a good plan until I got a call from her a few days after surgery. She told me that the pathology came back and it didn’t look good. I have papillary serous, which is a rather rare form of aggressive uterine cancer. Knowing that time had suddenly become an issue, she had already called an oncologist who would perform a radical hysterectomy. A few days later, I was back under the knife, where they removed the uterus, cervix, ovaries, fallopian tubes, lymph nodes and performed a pelvic wash. I went home on my birthday. I was hopeful that the cancer cells were contained in the uterus. As I healed from the two surgeries, I waited…and then waited some more. Two weeks went by and then the doctor sent an email. Could I come in the following day to discuss treatment? Treatment?

The long and short of it is, the cancer was not contained as the pelvic wash came back positive with only serous cells. The good news? The lymph nodes were clear, but because serous acts a lot like those cells found in ovarian cancer, he advised that we play rough. Three months of chemo, followed by 4 or 5 sessions of radiation…and then one more round of chemo for three months. If all goes well, I should be cancer free by May. Is it just me, or does that sound like a long way away?

Since the diagnosis, I’ve had a number of funny events take place. People mean well, offering up advice and various treatments they’ve heard of claiming to produce miraculous results.

One man thought I should talk to my cancer. Give it a name and tell the bastard to go away and leave me alone…that I no longer want to share my body with his kind. (I’m not altogether opposed to the idea so I’m currently working on a name that I can scream into the night…I’m leaning toward FuckFace)

Another woman who works at one of those juice bars (the kind serving green drinks that taste like a cow-patty pasture) told me I need to change my eating habits. I told her in that department I thought I was doing quite well…primarily eating fish, grains, nuts, and tons of fruit and fresh vegetables. I fudge sometimes and drink wine (OK, more than sometimes…but I’ve stopped) and when I want to be rebellious I eat mass quanities of salty chips and salsa. Of course, one can always tweek a diet, but I didn’t think I’d been too far off the mark. Then this self-proclaimed healer said, “Well, then it’s emotional. Whatever happened in your life five years ago is what triggered it.” Without getting into it here, five years ago was a very stressful time. She said, “Forgive whatever wrong was done and release it. Work hard to stop blaming yourself for anything that might have happened.” Alright, that was something I needed to hear. I tend to store emotional baggage like I have a warehouse of archive space. Point well taken…I can definitely work on that.

The last tidbit of advice seemed to border insanity. Supposedly in a little fishing village in Mexico there is a doctor who recommends drinking horse urine from a particular mare. For the record, I’m not opposed to alternative methods of treatment, but I think I’ll stop just this side of the horse urine.

Last night I spoke with my mom. She is scared and sad, but a real trooper. During the course of the conversation she kept mentioning a number of her friends who have the same kind of cancer as I have. Not to be funny, but from what I’ve read and heard, this is a rather rare form that makes up roughly 4% of all uterine cancer diagnosis. So I guess I was curious how that 4% happened to be all friends of my family. Was there something in the water? Maybe a Chernobyl cloud that passed over Seattle while we were all shielding ourselves from the rain? Then I asked her, “Mom, I’m curious…what type of cancer are you telling people that I have?” She said, “Cancer of the female parts.” In other words, anything from the belly button down and up the tunnel of love. Yes, sadly I guess a lot of women fall into that category. I dream that one day this dreadful disease will leave all of our female parts (and beyond) alone.

Fashion Forward Alert!
Last night I pulled all my hair in a tight bun on top of my head to simulate hair loss. Then I tried on a wide assortment of my husband’s hats. So far, I’m opting for the 30’s backward newspaper boy look…unless I lose my eyebrows too, in which case I may reconsider. If you have suggestions how to tie a scarf to give me the look of a carefree Cossack woman riding around in a convertible, let me know. I’m open to all suggestions, except horse urine.

P.S. Don’t worry..I’m not making light of a serious subject just for cheap laughs. I’m considering this mandatory therapy to help me find some perspective and lighten up. I definitely know how to wallow in the dark side of this disease, but these posts may help me scramble toward the light and remember how to smile.