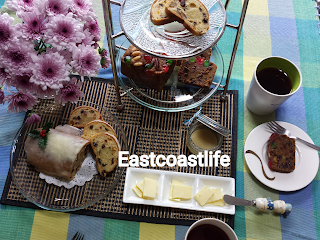 I have a young Facebook friend who is a talented baker. I have been captivated by his bread and Christmas goodies since the beginning of November when he started uploading photos of the finished products.

As I am organising a Christmas Eve dinner plus a Christmas Day High Tea for some senior citizens, I decided to make a trip to purchase his panettone, fruitcake and stollen one morning. In Singapore, these Christmas goodies are traditionally only imported but now I can have them fresh from the oven. 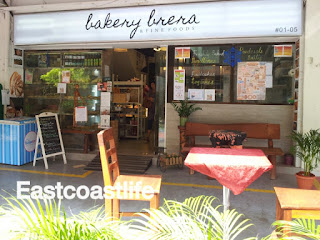 From East Coast Road, I took a bus to transfer to Farrer station on the downtown line, but I went to Holland Village instead. LOL.... I managed to find Bakery Brera after some difficulty because it was my first visit to this part of Singapore.

I was greeted by Thrina, the friendly lady boss. After hearing how I get to know her bakery, she brought Barry to meet me. The shy young man was hard at work, baking furiously to fulfil pre-orders.

I bought a stollen and a fruitcake, I was so disappointed that Panettones were sold out that day. 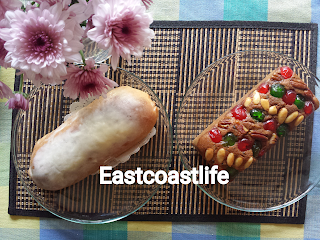 Thrina offered me some fruitcake and croissant samples for tasting. I was delighted to see pandesals being sold here. I like pandesals and promptly bought some.

I will go back for their pandesals, baguette and croissants on my next trip. 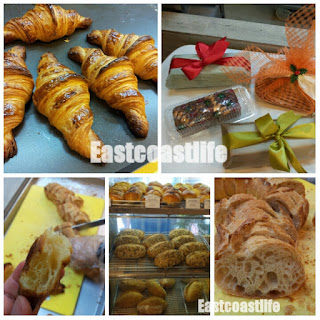 I did a trial run of Christmas Day High Tea one morning and my hubby likes the stollen very much. It was his first time tasting a stollen and he couldn't stop eating it. LOL

Their Christstollen or Stollen contains candied orange peel, cranberry, sultanas and black raisins, lemon zest, spices and marzipan (almond paste), giving it a rich flavour. This fruit bread is not too sweet and it is really yummy.

The fruitcake was rich and moist.... I should keep the fruitcake for a while more to allow it to ripen and mature for a more flavourful taste. 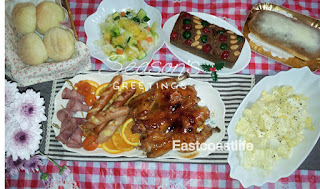 I also did a a trial run of  Christmas Eve dinner, my family members enjoyed eating the delicious pandesals, they are so soft and fluffy. My kids sliced the pandesals into halves, filled each with ham, sausage or baked chicken. Actually, the locally adapted version of this Filipino bread are delicious enough to eat on their own. 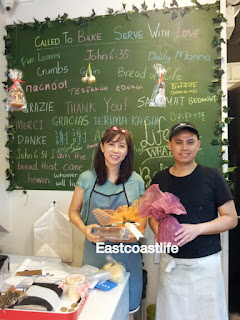 Thrina and Barry of Baking Brera.

I might have to do another trial run of the Christmas meals but we are positive our elderly guests will enjoy the Christmas goodies.