Cleaning Up After Your Dog - Is it Ethical? 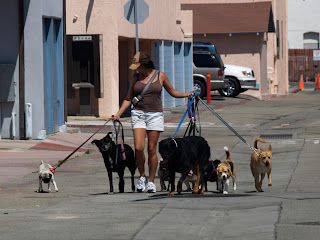 Some behaviors are so widely accepted that we never stop to think about why we're engaging in them, or to consider whether what's commonly deemed "right" really is. This week, after decades of pet ownership, it occurred to me for the first time that the socially-accepted norm of picking up behind our dogs was one of those behaviors.

Here's how it happened:

I was walking my dog, plastic bag in hand, and stooped to clean up after him.  As I knotted my plastic bag and turned toward the dumpster, I suddenly realized just what I was doing. I was taking organic, biodegradable matter that acts as a powerful fertilizer out of the grass, placing it in a plastic back that would take decades to break down and then tossing it into a dumpster to be transported to a landfill.

Sure, it's the social norm to clean up after your dog. And many areas have ordinances requiring that you clean up after your dog. But is it the right thing to do? Is your neighbor's distaste at dog droppings more important than the environmental impact of leaving it there (positive) or putting it in a plastic bag and sending it to a landfill (negative)?  Suddenly, I'm thinking not so much. And I'm wondering why I've never thought to question this before, and whether I'm alone in this.