Earlier today anchor Blitz Wolfer of the Crap News Network sat down with Mayor Ragu Macaroni to talk about the Mayor’s plan to build a Cell Tower Museum in Ridgeburyville’s scenic tourist district. This is a transcript of the interview.

Mayor Macaroni, thank you for taking time to speak with me. I hope you stay awake until the end of the interview. Some viewers fall asleep from the sound of my voice.

Thank you, Blitz. I just had four cups of coffee and a Red Bull. I’ve got a catheter bag in my pocket, and I’m good to go. I never miss an opportunity to be on TV. And please call me Ragu.

Well then … Mr.  Ragu, I understand from your Wikipedia page that you first fell in love with cell towers when you were only twelve years old.

Blitz, it’s just Ragu like the sauce. Yes, it’s true. My passion for cell towers began when I was a child. I’ve read every Telecom comic book:  EMF Glow Kids, Monopole Hulk and the Adventures of Cell Tower Man, to name a few.

I’ve always loved cell tower comic book art and then later, cell tower architecture when I was old enough to appreciate the beauty of those looming metal structures that rival the magnificence of a Calder mobile. The latticework on a cell tower is just as complex and mesmerizing.

When will the museum be open to the public?

We’ll cut down some trees, improve some roads then start building the stealth death ray, er tower in several months. We’re hoping the museum will open by the end of 2014. What an exciting venture. The inside will be as thrilling as the outside.

The museum will include a display of 20th Century cell tower designs, a copy of the 1996 Telecommunications Act written by lobbyists, miniature dioramas of blighted neighborhoods with boarded up windows and overgrown yards, as well as interactive exhibits where kids will experience what it’s like to glow in the dark and be able to fry an egg on their heads.

The architectural firm Appalling, Twisted and Toxic (AT&T) has been working up some gorgeous designs like this classic. 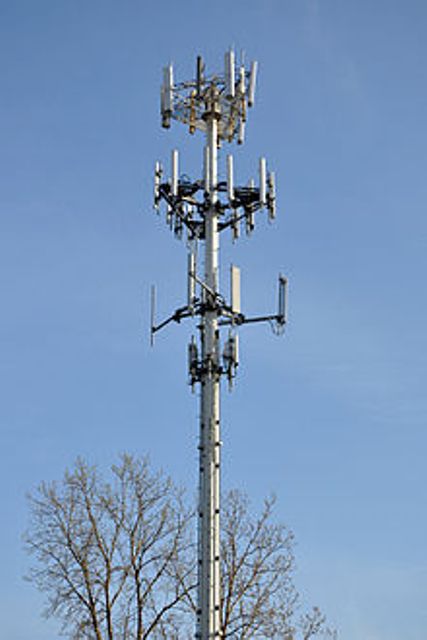 I understand there’s opposition to the Cell Tower Museum. Some say it will ruin the idyllic beauty of Ridgeburyville, a community that has been called  “… the quintessential New England town! … quaint yet contemporary, historic yet hip.”

Are you concerned the Cell Tower Museum will hurt Ridgeburyville’s tourism business? That the looming structure will tarnish the town’s image, and people will no longer think of it as “hip and quaint?”

Blitz, I don’t care what people think. The museum is funded by private donors. Money and perception isn’t important. Who cares if we lose a business or two as long as my legacy’s intact? My passion for cell tower art will be my gift to the people of Ridgeburyville, whether they like it or not. Look, I’ve been mayor since 1999 and that kind of makes me the king. And Blitz, it’s good to be the king.

Well there you have it. Mayor Macaroni’s thoughts on his Cell Tower Museum and the legacy he hopes to leave for his family and the people of Ridgeburyville.

Is anyone still awake in the studio?

Disclaimer: This is a fictional news story based upon a real life event, as noted by the related article link. The real story has nothing to do with a cell tower museum, if only that were true.  : )