blogcatalog
Hey guys!
I was lucky enough to be given a couch (in fact quite a bit of furniture) for my big move! And since the table turned out so wonderfully I figured why stop there!
The picture below is not the best example of this couch before. It did have cushion covers when I received it but I had removed them (for reasons you will find out later) so unfortunately this is the only 'before' picture I have. 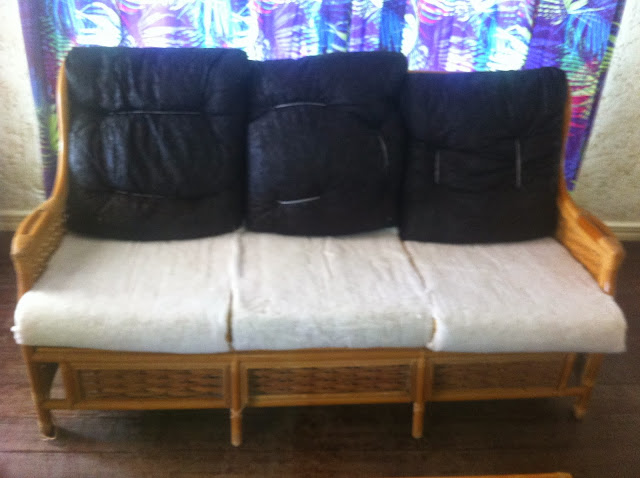 I was eager to get started on the painting but first I had some mending to do!
I'm not sure the picture below does the sagginess of the seat justice but trust me it was a pretty sad looking frame. Luckily it was an easy fix! 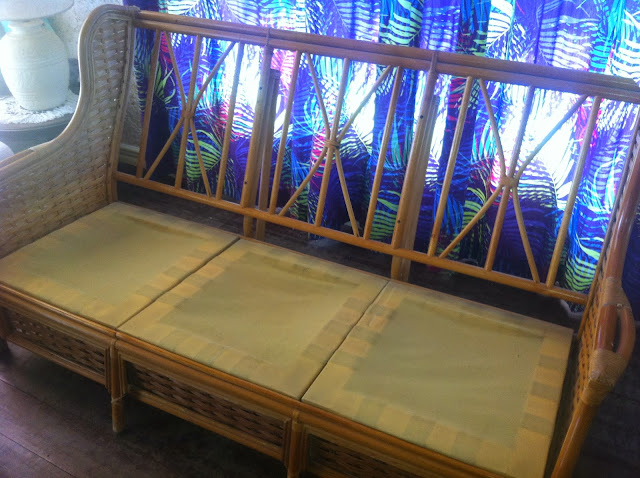 First I removed each section from the base of the chair and cut all the old fabric away so that I was left with a basic wooden frame. 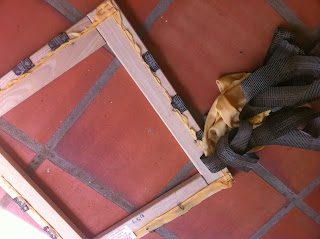 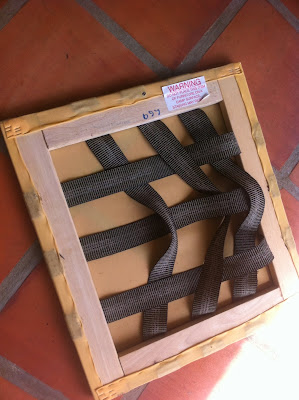 Then I cut a piece of cotton canvas a couple of inches larger than the frame. I placed the frame in the centre of the fabric and beginning at one edge I folded the fabric under and stapled it to the wood.
I continued folding and stapling in this way along one whole edge before moving on to the opposite edge and sides, pulling the fabric tightly to ensure the surface was taught. 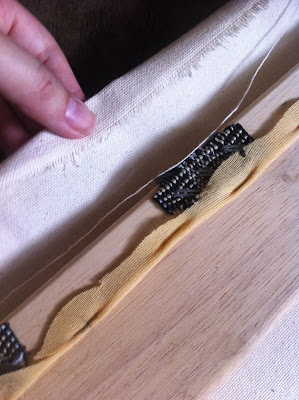 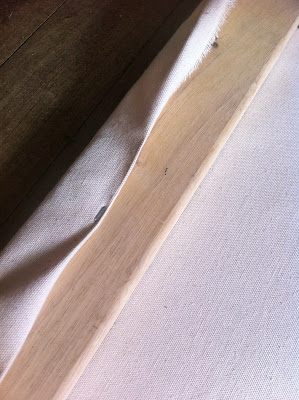 I kind of made it up as I went along when I came to the corners. Basically I cut away any bulky extra fabric and folded one side under the other so that it was nice and neat. 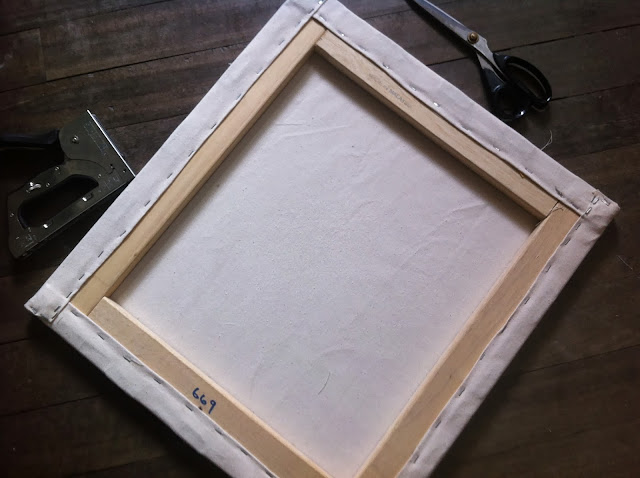 Here's how the frame looked with the new canvas seat! 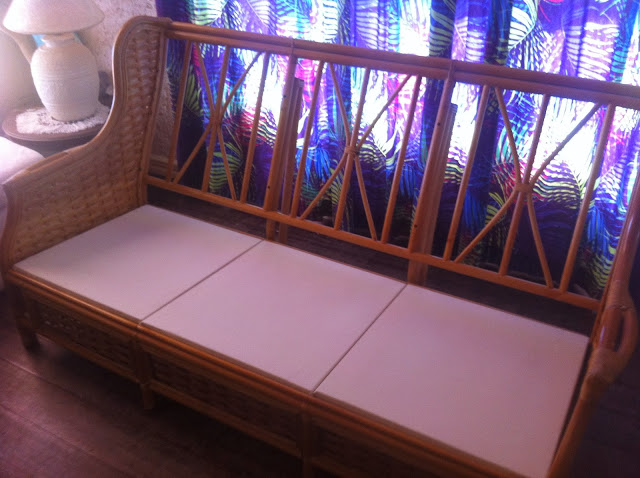 I knew this was gonna be nightmarish to paint by hand (what with the lack of flat surfaces and all the tiny, difficult to get to crevices) but I'd run out of my trusty automotive paint and unfortunately another mixture was just a teeny bit out of budget :(
I figured I would have needed about a million cans of spray paint and probably some expensive finger surgery if I'd decided to go down the spray can route. Instead I used a semi-gloss emulsion and a paint brush.
It took 3 coats of paint including primer and two days (along with some fairly serious sunburn) to finish but it turned out great! 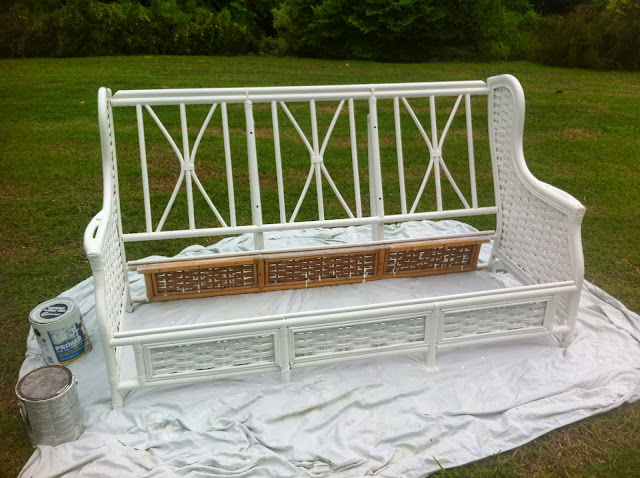 As you can see I didn't bother to paint the inside. That section of the frame is hidden under the seat of the couch and can't be seen from the outside.
Once the frame was looking snazzy it was time to tend to the cushion covers! Remember I said I would get to those!? Well here they are! 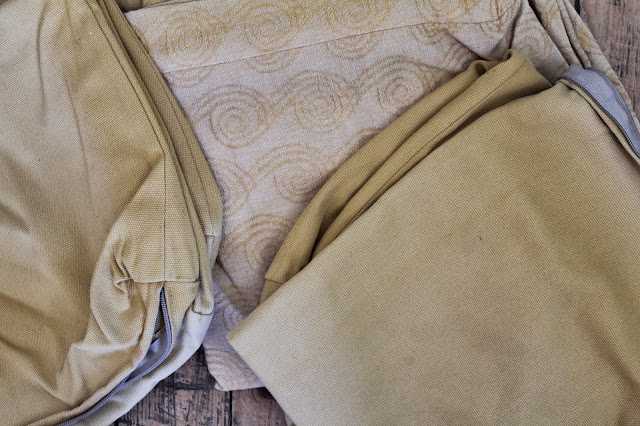 They're not the happiest looking cushions are they? Personally I'm a big fan of yellow so instead of replacing the fabric I decided to revive it!

I used Dylon Sunflower Yellow dye and 500g of salt (to fix the colour). Dylon is very easy to use and gives great results when the instructions are followed correctly. I've dyed a lot of things over the past few years and I've learned that when using a single colour in the washing machine it can't hurt to add a little more dye than you need! I wanted a really strong yellow so that's exactly what I did! 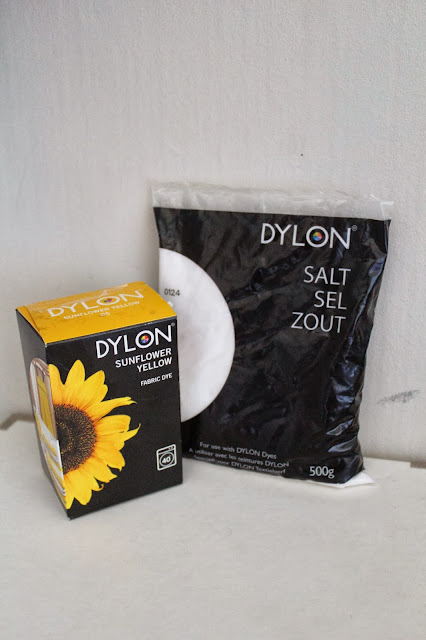 I used 3 boxes of dye for 6 cushions and the result was better than expected!! See for yourself! 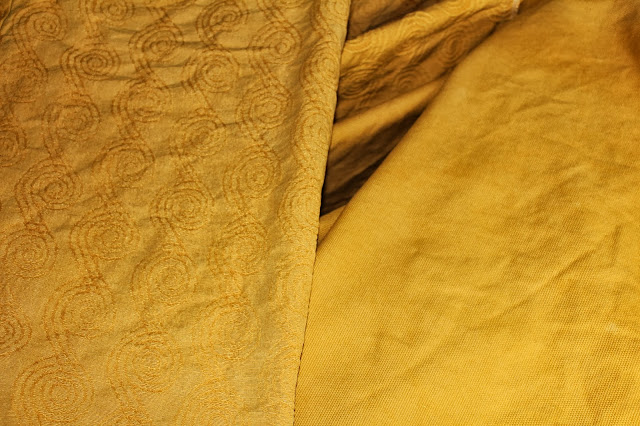 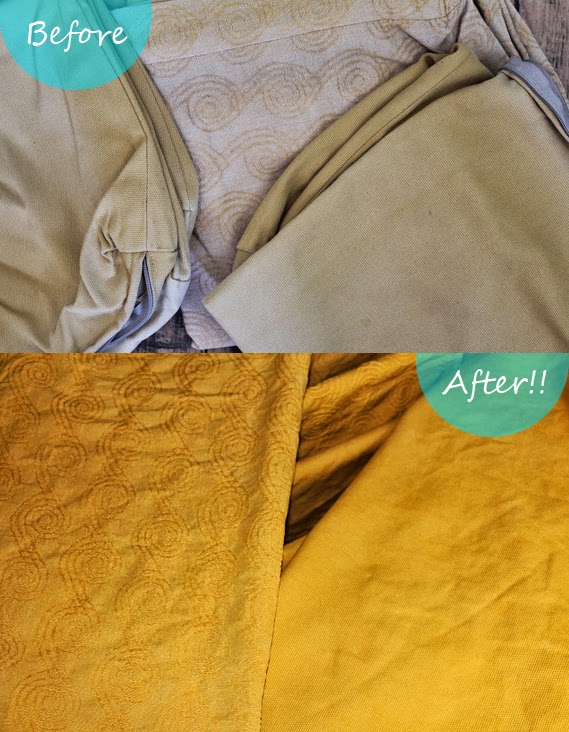 I think you'll agree it's a HUGE improvement!!! :D

Juuuuuuust in case you need more convincing here's the before and after of the whole couch! 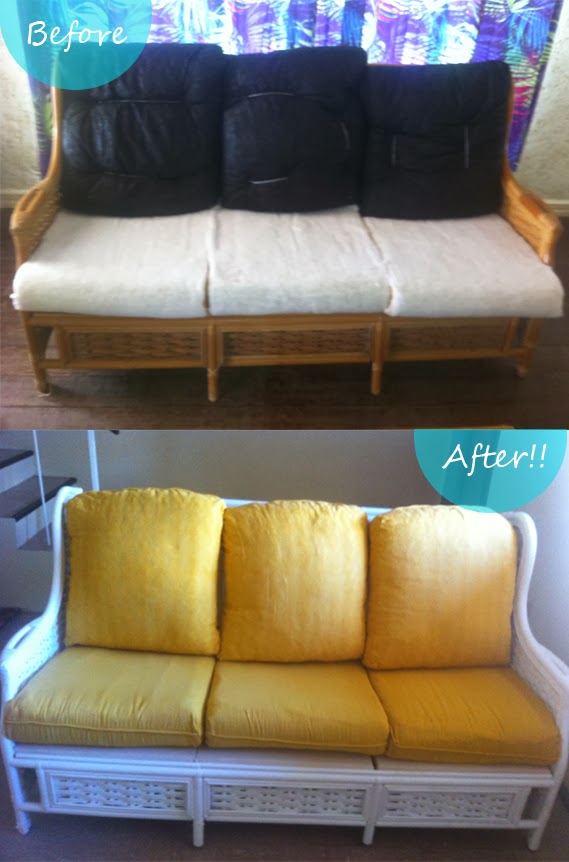 Note: If you're worried about dye being left in your washing machine try running an empty cycle when you're finished. This will get rid of any residual dye that may have been left behind in the drum!
That concludes my couch makeover!! Thanks for reading!!! :D
I'll be posting more furniture refurbishments over the next few weeks so keep your eyes peeled!
We use cookies to improve user experience, remember your preferences, and analyze website traffic. By continuing to browse this website, you consent to our use of cookies as outlined in our Privacy Policy.