Decemberists Divide The World In Two 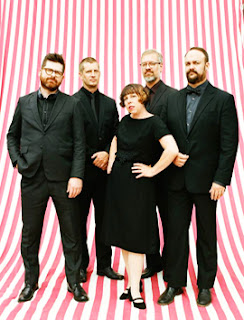 Four years seems like a long time between albums, especially for a talent like Colin Meloy and company, but The Decemberists didn't squander a minute of it. While bandmate Jenny Conlee was diagnosed with breast cancer (now in remission), Meloy explored his relationships at home and took time out to be a father.

The exploration proved to inspiring for the musician/writer. While working to provide the best possible education for their eldest child Hank, who is autistic, he wrote the bestselling Wildwood series of children's novels. His wife illustrated it.

More than that, the hiatus also provided Meloy with ample time to reflect on the last six albums and come full circle. Expect comparisons to their first album more than any other. The storytelling in the new album is more fantastical amidst a backdrop of alternative rock with Americana, British folk, and pop influences. And the return to these roots has been therapeutic in a sense, with Meloy being open about his work beginning to feel too much like a career and not enough about self-expression.

What A Terrible World, What A Beautiful World.

There is no mistaking this seventh album as more expressive as Meloy embraces the best and worst of the human experience capsulized into pop songs ranging from three to five minutes. And yet, some of it is surprisingly intimate too, with the opener an explanation for the album set to music.

"We know you grew your arms around us in the hope we wouldn't change," sings Meloy. "But we had to change some, you know, to belong to you."

The directness of it is almost off-putting in its expectedness, yet Meloy manages to deliver it with a conviction that is both sad and authentic, bold and truthful. The spell is quickly broken, however, by Cavalry Captain and Philomena. Both carry an uptempo pop punch, with the latter bringing in some elements of whimsy into the lyrics and composition.

While this whimsy may represent the beautiful side of the world that Meloy has chosen to write about, The Decemberists still seem to be a band better suited to the deeper complexities of Portland. It's tracks like Make You Better and Lake Song that provide addictive glimpses into the soul of the songwriter.

It's also on this track, Lake Song, where the album takes a turn toward the deep and intricate tones that the band is so adept at expressing through Meloy's melodies and the musicianship of Chris Funk, John Moen, Nate Query, and Conlee. Till The Water's All Gone, The Water Year, and Carolina Low all conjure up the unique musical complexities that have put the band on the map.

While there are some bleats of happiness between those and the end of the album, The Decemberists build upon their brooding seriousness, reading a crescendo with the song 12-17-12. The band captures the  horrific school shooting at Newtown, Connecticut's Sandy Hook Elementary School with a startling but sensitive sobriety. It's one those songs you don't expect to appreciate for its subject matter, but you will anyway. The conclusion, A Beginning Song, offers an uplift and to leave on a note of recovery.

What A Terrible World, What A Beautiful World Drifts 7.2 On The Liquid Hip Richter Scale.
What A Terrible World, What A Beautiful World contains some sensational songwriting with elements that are recognizable from across their career, with an emphasis on their earlier work as it might have sounded with the experience they possess today. Although the subject matter makes the album sound uneven if played from the top down, the net sum is far greater than that one annoyance.
Still, the variance (loved or not) is an indication that the band hasn't become a commodity. They are songwriters, composers, and masterful musicians who have something to say. The shock of it.

What A Terrible World, What A Beautiful World by The Decemberists is available on Amazon. You can also download select songs or the album from iTunes. The Decemberists will be on tour to support their album. Visit Facebook for their upcoming tour schedule.