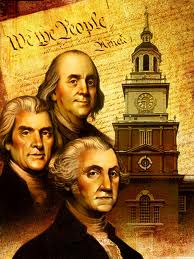 This post is sort of a "two-parter."  The first part deals with the Constitution of the United States, and the First Amendment to that historic document by which our country is governed.  Please read very carefully the words of the First Amendment:

"Amendment 1 - Freedom of Religion, Press, Expression. Ratified 12/15/1791:
Congress shall make no law respecting an establishment of religion, or prohibiting the free exercise thereof; or abridging the freedom of speech, or of the press; or the right of the people peaceably to assemble, and to petition the Government for a redress of grievances."

Many scholars believe that the First Amendment is the most important part of the Constitution, because it protects several of the basic human rights, and reminds us of some of the dangerous areas on which the government might attempt to tread.  The first part, to me, is the part that this nation needs to become aware of, and to remember in the next few months.  It is MOST important.  There are conservative groups in this country who are trying to force their religious beliefs on the nation.  They would like to see their rules for life, health, and marriage become laws in America.  They want their religion to be THE religion of the United States.  As you can see, the Founding Fathers were firmly against this kind of thinking.  They had had enough of religious intolerance in England, and were determined that that intolerance NOT happen in America.

Forty of America's finest men signed the Constitution.  If they had not firmly believed in what they had written, do you think they would have put their names to it?  If you would like to see those names, let me know, and I will send you the list.

Many of these "conservative" groups have stated that all one has to do is read the Constitution to find that God had a hand in the writing, and that the name of God can be found in the words that were written.  Read it!  Read the Constitution, and see if you can find a reference to the God, or Jesus, or a Creator  that these modern "conservatives" worship.  Let me save you some time.  It isn't there.  The only reference you will find is "in the year of our Lord" which at that time was a common way of stating the date, and had nothing to do with religion.   The people who have told you otherwise either have not read the Constitution, or believe that you will not read it yourself, and will only take their word for it.

During the Republican debates, one of the hopefuls, a woman, stated with certainty that John Adams and his family were devout Christians who fought to abolish slavery.  First, slavery wasn't an issue at that time, and second, John Adams, his wife, Abigail Adams, and their son John Quincy Adams were actually Unitarians.  In fact, many of our founding fathers were either Deists or Unitarians, and were not at all associated with any conservative Christian group.  Thomas Jefferson, one of the signers of the Constitution,  is identified with both Unitarianism and Deism.

So, let's talk about Deism.  Deism is a religious philosophy that deals with reason and observation of the world at large.  The Deists feel that there is no need for organized religion.  They also do not believe  in the supernatural manifestations such as miracles.  They believe that God does not interfere with the decisions, good or bad, that we make in our lives.  Deists believe that human beings see God through the world around us, and through nature.

I took an active part in organized religion for many years, until one day I woke up and realized that that religion just wasn't working for me any more.  I'm not saying that I don't believe in God.  The jury is still out on that one.  But, like the Deists, I don't believe that God intervenes in our lives, to save us in times of need.  If He did, no children would die needlessly, and no people would be made to suffer from painful and debilitating diseases. I don't believe in miracles, and I certainly don't believe that an image of the Virgin Mary appearing on a toasted bagel is a message from God. The Deists believe that God does not interfere with  situations in the natural world.  If He did, He would be on serious overload 24 hours a day!

Here is an example of that overload:  Rod's brother, an evangelical, came to visit us a few years ago.  He had been in Phoenix for a chiropractic seminar, and came down to play golf with Rod before going back to Atlanta.  The day before, he had lost his "readers."  I happened to have an extra pair that someone had left in my booth at an art fair, so I gave them to him.  He proceeded to tell me that God had provided those readers for him in answer to his prayers!  Really?????  God has enough time on his hands these days to come up with readers for you??? Get over yourself!  Women are being raped in Africa! Children are starving in third word countries!  And God provided you with "readers"?????

Getting back to the Deists, here are some names that you might recognize as contributors to the American way of life over the years:

I can go on, but I doubt seriously that the people who really need to get this message are actually reading this post and THINKING.   What I really want is for those sanctimonious people to realize that the rest of us have just as much a right to our beliefs as they do, and to quit trying to undo what our Founding Fathers did when they wrote the Constitution.  Freedom of religion is a basic human right.