When I travel around the villages of the New Territories, I see many traditional houses, but most are in an extremely dilapidated condition, and many are being demolished to make way for more modern dwellings. I’m not referring here to the kind of house that I wrote about in Bamboo Garden, which would be more accurately described as a kind of mansion, standing as it does in its own grounds. I’m more interested in what might be considered the Chinese equivalent of the cottages found in a typical English village.

I’ve no idea how old some of these houses are, but they certainly predate the Second World War, and I imagine that in fact they were in existence when Britain signed its 99-year lease on the New Territories with the Qing Dynasty in 1898. In this post, I’m only considering a single village, Muk Wu, which is located close to the border with China and which was, until the beginning of 2016, in the so-called ‘closed area’. This means that, until last year, outsiders like me would not have been allowed anywhere near the place, and because of this relative isolation, there are architectural features here that are much less commonly seen in villages that have been more extensively developed since the 1970s.

Muk Wu has a kind of gatehouse, which suggests that in the past it had defensive walls to protect its inhabitants against bandits and other ne’er-do-wells. The walls no longer exist, but the houses on each side of the gatehouse are crammed together, and it seems likely that in their construction they incorporated the existing walls. This has certainly happened in many other villages I’ve visited, including Fanling Wai. 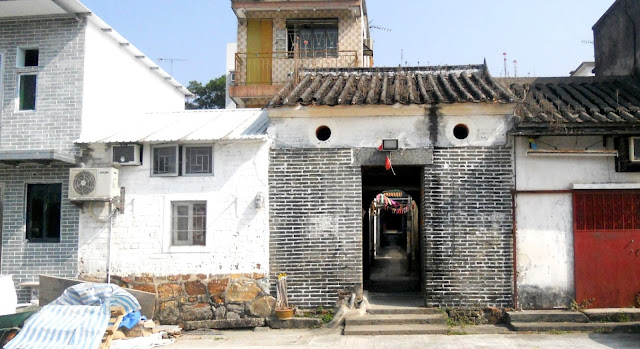 I’m not sure of the purpose of the two round holes above the entrance, which may have a fung shui function, but there is a platform inside the gatehouse above the entrance, so I conjecture that they were originally openings through which guns could be fired against attackers once the gate had been closed.

The village has not one but two temples: there is a very modern one at the head of the alleyway straight ahead from the gatehouse (the orange tiles of its roof can be glimpsed in the previous photo), but an older one, located outside the original village, is still in use—and is much more interesting: 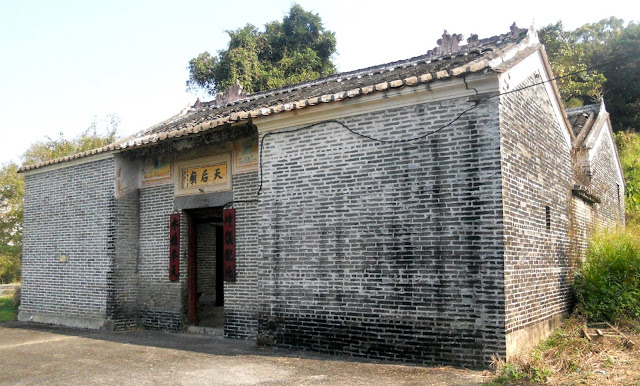 The painting under the eaves to the left of the door is particularly notable. It illustrates a famous Chinese poem in which an official (the figure on the left with the winged hat) has had too much to drink and is dancing around with his head lolling to one side. The other two figures are servants, recognizable as such by their hairstyles; the one on the right may also be dancing, and he could well have been surreptitiously at the drink while his master wasn’t paying attention: 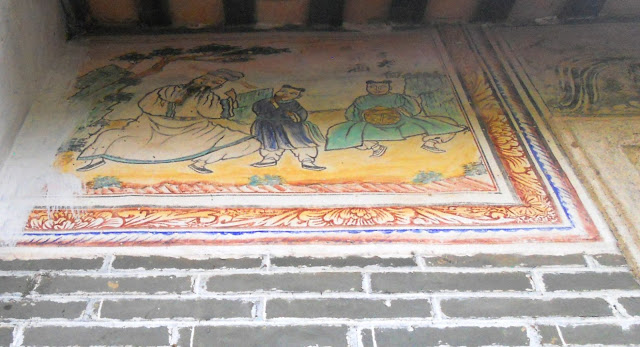 Within the village, the central alleyway that leads from the gatehouse to the new temple is much wider than that in Fanling Wai, and the side alleys are also wider. The next few photos are of traditional houses in the transverse alley in front of the temple, starting from the left: 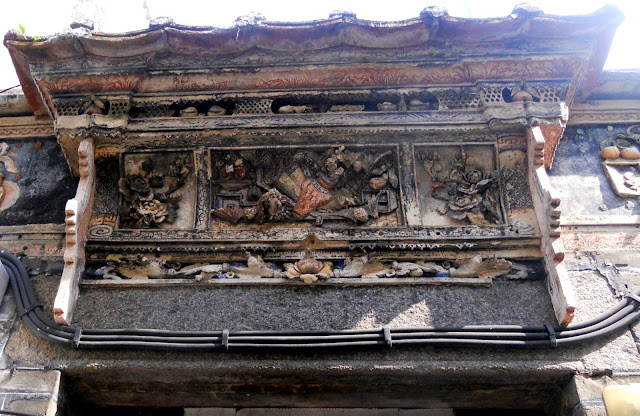 The roof projects a short distance above the doorway in this house, although it would not provide much protection from a tropical downpour. The mouldings would once have been brightly painted, but it is still possible to see the intricacy of the craftsmanship. Note too the diorite door lintel. This would not have been a cheap option. The next two photos are of the mouldings to the left and right, respectively, of the previous photo. I leave the reader to decide what is depicted here. 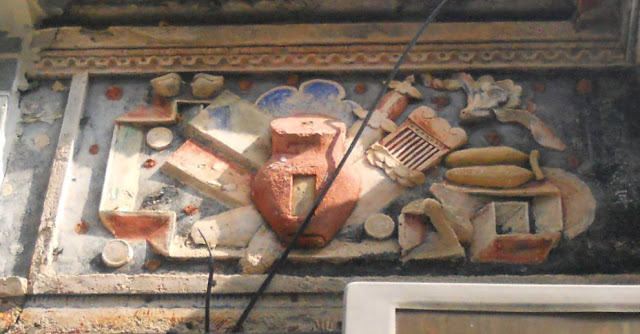 Next door to the previous house is a similar building on which the mouldings on each side of the door have already disintegrated, and the section directly above the door is much less intricate than that of its neighbour. The three ‘designs’ in the centre appear, superficially, to be Chinese characters, but they probably aren’t. I certainly can’t provide a translation.

On the opposite side of the temple, there is a large gap where a traditional house has recently been demolished: 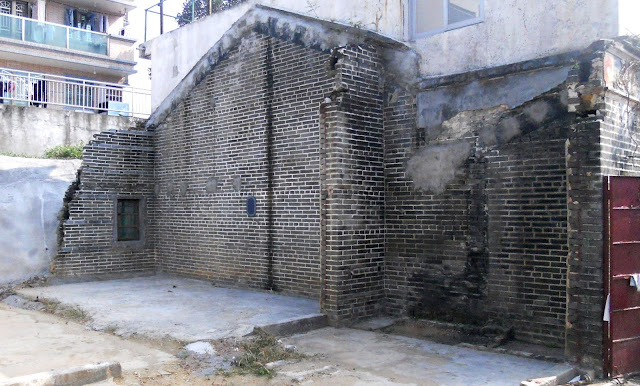 This photograph does at least demonstrate one feature of traditional Chinese houses that I haven’t discussed: while the outline of the pitched roof indicates the location of the house’s living quarters, the flat section to its right is part of what would once have been a walled courtyard. The doors in the photos above, which are still in use, provide access only to such courtyards, not directly into the house. Note too the remnants of mouldings on the extreme right of the photo. This is shown in more detail in the next photo: 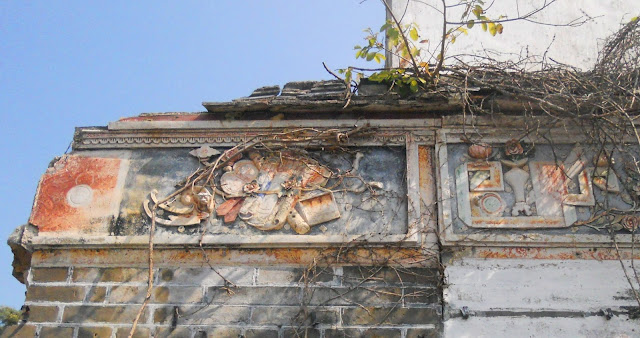 It is unlikely that this section will last much longer, given that so much vegetation has already established itself here, so I will present the next three photos, which include two more entrances, without further comment: 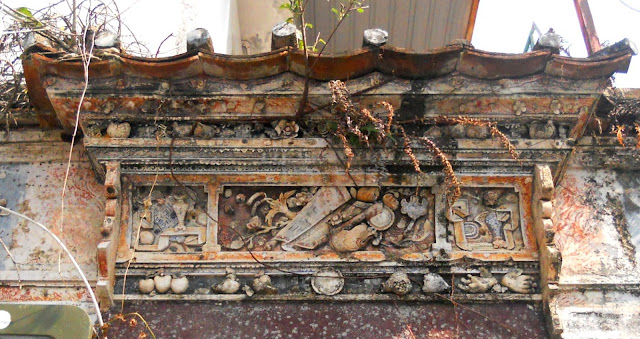 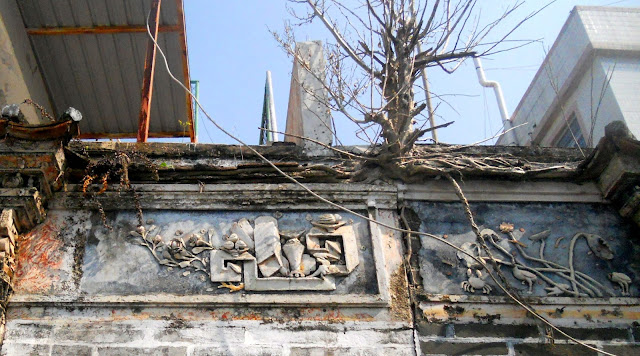 Did I say ‘without further comment’? I can’t avoid remarking that the moulding on the right of the second photo appears to depict some nightmarish carnivorous plants. Or is that just my fevered imagination?

Finally, I present three photos of a house that you will pass between the gatehouse and the temple. The first is of a moulding on the gable end, the second of a moulding on the side wall of the courtyard, and the third of the craftwork directly above the entrance to the courtyard. The writing visible in the second and third photos is in an archaic script that most Chinese cannot read. 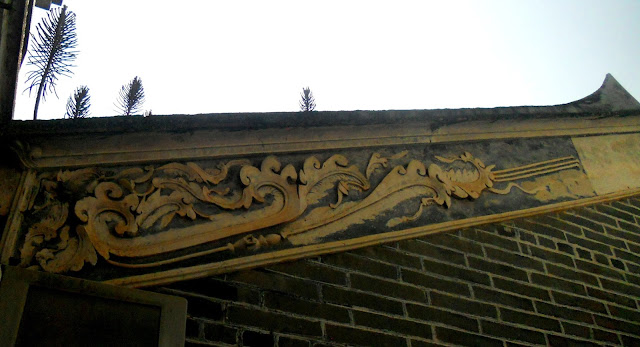 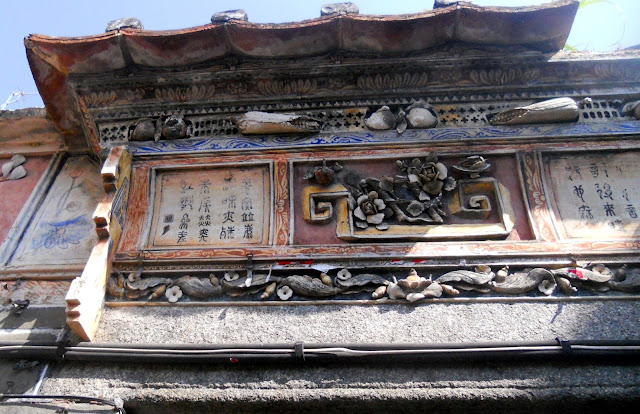