A discussion with Stephanie Hepburn, author of Conversation With My Daughter About Human Trafficking

The reality of human trafficking is often so horrific that it remains one of the most difficult subjects to discuss with children.  How does one get into a conversation with children about how individuals are tricked, extorted and enslaved without exposing them to ideas that may be too mature for them, such as sexual exploitation, rape and the murder of their loved ones? How do we impress upon them that this is not just something that is happening in a far away country but something that is happening in our own city? 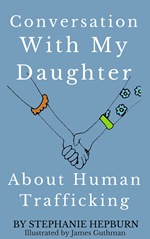 In Conversation With My Daughter About Human Trafficking, beautifully illustrated by James Guthman, Stephanie takes us through some of the questions that her daughter asked and the answers that she gave. The book is an excellent starting point for discussions on this difficult topic and will be of great use in classrooms and homes to get children talking and thinking about human trafficking and how they can identify, understand and prevent this phenomenon in their own environments.

We caught up with Stephanie to discuss the book and her experience in the field of human trafficking.

The impetus was my move to New Orleans in February 2006, not long after Hurricane Katrina devastated the city and Gulf Coast region. The infrastructure was destroyed and there was a sudden demand for low cost labor, which allowed opportunity for unscrupulous people to step in. This was compounded by the decrease in law enforcement in the city and also federal under-enforcement of temporary work visas.

I saw red flags of exploitation and human trafficking all over the city and it made me realize that it can happen anywhere, not just somewhere far away. I began digging deeper and adding more nations as I went along. I ended up compiling my findings in Human Trafficking Around the World: Hidden in Plain Sight, which was published by Columbia University Press in 2013.

How did the idea for your book Conversation With My Daughter About Human Trafficking evolve?

After pulling my head out of the research world and talking to people about my book, I was able to learn what everyday people think about the issue of human trafficking. Adults are often wary of looking uninformed so these conversations, while useful, often seemed indirect. Eventually, I would figure out the piece (or pieces) of the puzzle they were missing and I could address it, but it took a while to get there.

Children are the opposite. They are unabashed in their curiosity and they say what they think and aren't overly concerned about seeming informed, so misunderstandings and areas of confusion are easier to identify. Kids are also awesome little people who are our future, so figuring out how to talk to them is essential for the future of humanity. Getting them to understand what to look out for and what red flags to identify in traffickers and victims creates an entire generation of eyes and ears that are way ahead of where we are now.

In your experience, which aspect of human trafficking is the most difficult for children to comprehend?

I think for my daughter the challenge is understanding why someone wouldn't just run away. Physical chains are something she can understand but the concept of psychological chains is more difficult.

How do you envisage that the book should be used?

What feedback have you received so far?

The feedback has been overwhelming and positive. I have come to a point where preaching to the choir (advocates and others involved in the anti-trafficking realm) just isn't enough. Real impact will happen when your average person has a greater understanding on the topic. That said, reaching your audience is always the challenge. In this case it has worked and people are reading it and passing it along. I feel extremely happy about that.

The book is beautifully illustrated by James Guthman. Can you tell us a little bit more about his illustrations and how you came to work with James?

A colleague recommended him and sent a few pictures of his paintings and illustrations. He's very versatile and was able to capture the look I wanted for the book. It was important to me that the book contains a universal feel to it since human trafficking happens everywhere. So often this issue is unintentionally represented as happening to people in only a few parts of the world, based on the visuals used in tandem when the issue is reported. As a result, we chose a color pallet that does not indicate a specific race or region of the world, and to create vignettes when people are depicted in the story. The color pallet also had to mirror the tone of the book without being too visually depressing. It's a hard subject, so striking the tonal balance was important, and he did a really great job with it. You can check him out on Instagram at www.instagram.com/jamesguthmanart

Are there plans to release the book in paperback or hardcover or will it remain an ebook?

For now it will just be an ebook. I don't know what the future holds. Paperback would be fantastic!

Together with Rita J. Simon, you've written another book about human trafficking Human Trafficking Around the World: Hidden in Plain Sight. Can you tell us a bit more about that?

I talked a bit about the impetus above. The book took exhaustive research and time. In many ways it was my education on how to get one-step closer to communicating with the mainstream population on this topic. It contains narratives, which I find essential because people relate to stories. It also contains meaty statistics, which help to create perspective on the prevalence of human trafficking. It really is a great book for those who have been introduced to the topic and want to know more. I would say it's step two in reading after Conversation With My Daughter About Human Trafficking.

This was actually your second book with Rita, the first being Women's Roles and Statuses the World Over (Global Perspectives on Social Issues). That sounds really interesting. Can you tell us a bit about the issues you covered in that book?

This book was a turning point for me. I was in law school at the time and sick of my female peers having a negative knee-jerk reaction to the term feminism. Many of my friends would start off a conversation with "I'm not a feminist or anything but..." They worried they wouldn't be taken seriously if they were thought to be a feminist, which somehow has become synonymous with extremism. It isn't. It just means that the person believes women and men to be equal. That's it. Anyhow, I decided to write a paper, for one of my law school classes, that was just based on law and empirical data to illustrate where women actually stand in the U.S. My professor Rita J. Simon asked me if I wanted to turn it into a book. I did and I added on 25 other nations. It was eye-opening for me as I hope it was for readers. We have a long way to go.

What are you up to next?

My objective to bring awareness on labor exploitation and human trafficking to the mainstream world triggered me to open Good Cloth, an online ethical clothing shop, this past October. During the media junket of Human Trafficking Around the World: Hidden in Plain Sight I quickly realized that people wanted to know how to purchase ethically and to ensure that no one was harmed in the process. They, in essence, wanted to vote with their dollars for ethical change and corporate responsibility. Fashion is an ideal arena for informing people about human exploitation and positive changes they can make. People don't like feeling helpless, which is easy to feel when you hear about the horrors of human trafficking. This is a way for people to make positive decisions in their day-to-day life that actually make an impact. It makes the customer feel great and does a great deal for starting the dialogue about corporate responsibility and spotlighting designers who are taking excellent measures to protect workers and the environment.

Through the shop and my journalistic pursuits I will continue to try to reach the mainstream audience about this important topic.

Stephanie Hepburn is an independent journalist whose work has been published in the Guardian, Huffington Post, Americas Quarterly and the journal Gender Issues. She is a weekly and monthly contributing writer for the New Orleans Times-Picayune. A graduate of the University of Michigan and the Washington College of Law at American University, she integrates her legal and journalism backgrounds to create pieces that are highly informative and have a human tone. Her book with Rita J. Simon, Women's Roles and Statuses the World Over, was named an Outstanding Academic Title by Choice. Her second book Human Trafficking Around The World: Hidden in Plain Sight was published by Columbia University Press in 2013.

Conversation With My Daughter About Human Trafficking is available on Amazon.co.uk and Amazon.com.