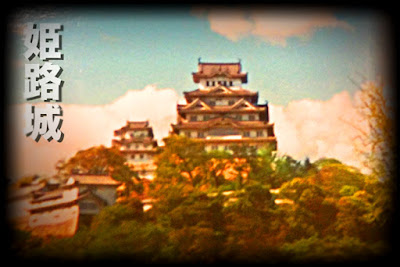 Under an azure May sky, Himeji-jō stood majestically in the centre of the city. It was Stratum XVII, and Stoddard, Aliyah B., and Tài Lè made their way through the gates up the walkway and to the keep to find the castle’s interior to be no less majestic.
But Stoddard noticed that the travails of far-flung travel were taking its toll on his companions. Incessant bickering and snotty sarcasm were blinding them to the centuries-old marvels before their eyes. Plus, Stoddard found it taxing on his own enjoyment.

Time for a bail-out plan. 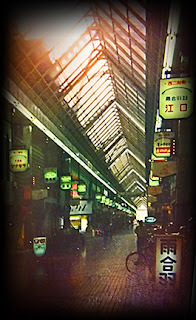 Whilst the trio walked through one of many covered shopping arcades (this one strangely deserted), Stoddard slowly lagged behind the squabbling duo and ducked into a 100-yen shop. He pretended to browse as he whipped out his JR map and timetable.
Perfect.
Stoddard strode back out into the arcade and looked both ways with a deep breath.
The shopping street extended at least a kilometre in either direction, still deserted.
Stoddard breathed again and smiled. The burden of downer company had lifted — he felt like a free man — free to explore, free to get lost in an alien city, free to take it all in one step at a time. And he did.
Buying paper lantern gifts, a happi coat, some conveyor belt sushi, enjoying conversation with some lovely bijin.
As the afternoon waned, Stoddard made his way to the Limited Express Railway Station for the trip back to Kobe.
Sitting alone on the train, he stared westward and savoured a Déjà Vu of gazing at a similar sunset six strata prior, from a train going from Napoli to Roma.
Solitary travel can sometimes seem the most satisfying.