CHICAGO — Dominick's Finer Foods and ABC 7 Chicago will help stock pantry shelves this holiday season through the annual Dominick's & ABC 7 Chicago Holiday Food Drive. The eight-week event runs from Nov. 5, 2009, through Jan. 3, 2010. Last year, the food drive collected the equivalent of 837,653 pounds of food that benefited hungry men, women and children. This year, the goal is to gain the equivalent of more than 1 million pounds of food so that everyone in our community may enjoy the bounty of the holidays as 35 percent more people are turning to pantries for food assistance. 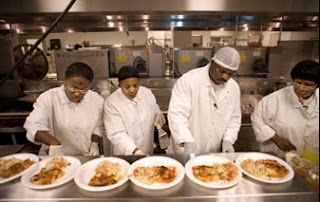 ABC 7 meteorologist Tracy Butler and anchor Hosea Sanders will help focus attention on the critical need to fight hunger, with live reports and weathercasts from three Dominick's stores on Tuesday, Dec. 1. To donate food and see the reports, visit the Dominick's store at 2550 N. Clybourn from 7-9 a.m., the store in Park Ridge (1900 S. Cumberland) from 11 a.m.-noon, and the store in Downers Grove (42 E. Ogden) from 4-4:30 p.m.

Additionally, Butler and Sanders will appear in public service announcements supporting the food drive. Butler has helped to spearhead the public service campaign for the Holiday Food Drive since 1999. ABC 7 public affairs program "Chicagoing," featuring Bill Campbell, will examine the issue of hunger in the area and the importance of the Holiday Food Drive with Kate Maehr, executive director, Greater Chicago Food Depository, Sunday, November 29 at 11:30 a.m. on ABC 7.

During this effort to fight hunger across Cook County, individuals can drop off nonperishable food items at the ABC 7 Chicago lobby, at 190 N. State Street, or at any local Dominick's location or by making a donation to the Greater Chicago Food Depository through Depository Dollars, available at the check-out counters of any Chicagoland Dominick's store in $1, $2 and $5 denominations. A complete listing of Dominick's stores can be found at www.dominicks.com.

Dominick's Finer Foods and ABC 7 Chicago are leading their community in a multi-level effort to do good this holiday season. From encouraging individuals to donate can goods, donating themselves, and hosting an online donation campaign, they are doing everything they can to surpass the needs of the community. Not to mention, the ample media exposure their efforts are receiving — what better way to be known than as a company that is truly invested in the community it serves.