Donald Trump defends going to hotel opening instead of campaigning: “What am I supposed to do, not show up?” 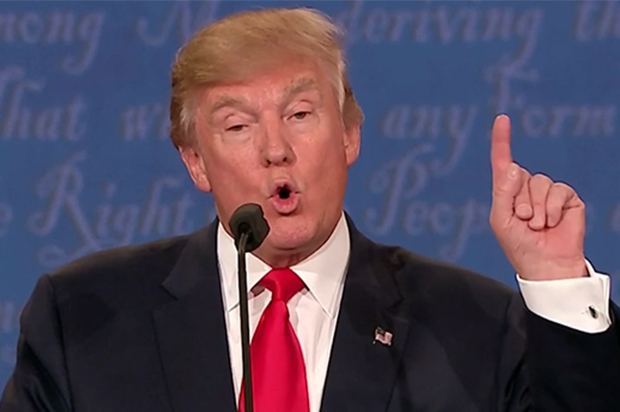 During a soon-to-be-controversial interview with Good Morning America that aired Thursday morning, Donald Trump deflected criticism that he has focused more on his business ventures than winning the election and insisted that he knew more about military situations than experts and veterans’ families.

“I built one of the great hotels of the world. What am I supposed to do, not show up?” he complained to George Stephanopoulos, referring to his decision to attend a ribbon-cutting at a Washington, DC hotel Wednesday, instead of hitting the campaign trail.

“I’m taking one hour off. I’m going to North Carolina right after this, then I’m going back down to Florida. I’m going up to New Hampshire. I’m all over the place.”

Trump contrasted his own perceived stamina with that of Hillary Clinton and accused the media of holding the two candidates to double-standards.

“She has no energy. She’s got nothing going. She does one stop and nobody complains about that,” Trump told Stephanopoulos. “Nobody complains when goes to an Adele concert all night long, while I’m making two speeches at rallies with, you know, massive crowds.”

Trump also addressed criticisms of his strategy for retaking Mosul by telling Stephanopoulos, “You can tell your military expert that I’ll sit down and I’ll teach him a couple of things.”

When asked about the controversy over his feud with Khizr Khan, whose son Humayun Khan died in Iraq, Trump proclaimed “Had I been president, Captain Khan would be alive today. We wouldn’t have been in this horrible, horrible mistake, the war in Iraq.”

WATCH: “People are hurt badly by social… most of [people he has insulted] deserved it.” – Trump on social media https://t.co/ZuOiEvApbG

Khan has openly denounced Trump during this campaign and backed Clinton to be the next president.

The interview was the first Trump has held with his wife Melania since the final presidential debate.