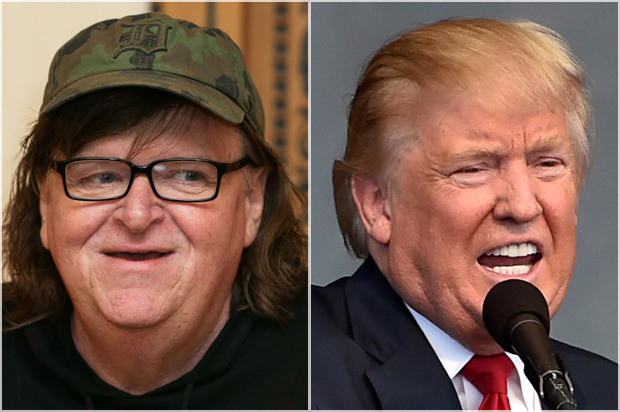 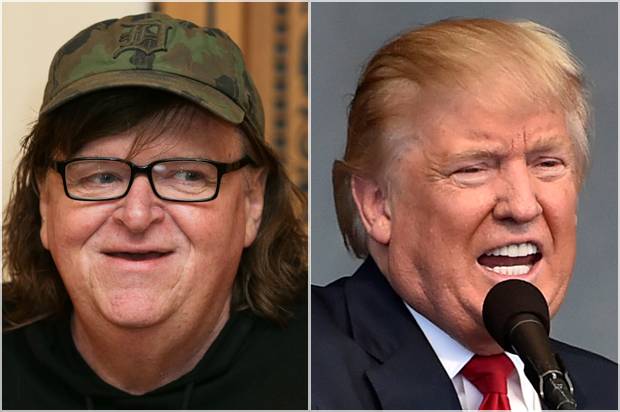 Michael Moore is supporting Hillary Clinton. But after telling Ohio voters that “Trump’s election is going to be the biggest ‘fuck you’ ever recorded in human history,” the GOP nominee suddenly finds himself singing the praises of the progressive filmmaker.

While recently promoting his new “TrumpLand” documentary, Moore explained to a crowd that he knows many people in what he described as “the Brexit states” — Michigan and Ohio and Pennsylvania and Wisconsin — who plan to vote for Trump and “they’re not racist or redneck, they’re actually pretty decent people.”

Trump, Moore explained, “is the human Molotov Cocktail that they’ve been waiting for; the human hand grande that they can legally throw into the system that stole their lives from them”:

And on Nov. 8, although they lost their jobs, although they’ve been foreclosed on by the bank, next came the divorce and now the wife and kids are gone, the car’s been repoed, they haven’t had a real vacation in years, they’re stuck with the shitty Obamacare bronze plan where you can’t even get a fucking Percocet, they’ve essentially lost everything they had except one thing — the one thing that doesn’t cost them a cent and is guaranteed to them by the American constitution: the right to vote.

Needless to say, Team Trump was quick to amplify the seemingly positive remarks about the beleaguered candidate from a most unlikely source.

“I agree,” Trump tweeted to Moore Thursday with a link to the comments. “To all Americans, I see you & I hear you. I am your voice”:

“I probably don’t agree with him on a lot but Michael Moore gets this one right 100%,” Trump’s eldest son, Donald Trump Jr., wrote on Twitter this week.

But, as Moore pointed out, the Trumps are not telling the full story on his statement about Trump voters, whom he also called “legal terrorist” while promoting his film.

What the abbreviated clip of Moore’s statement leaves out is Moore’s assessment of disenchanted “Brexit state” voters selecting Trump.

Talk about damning with faint praise. Moore ended his introduction to “TrumpLand” with this message to Trump voters: “Goodnight America. You’ve just elected the last president of the United States.”