Don't shoot, I am only trying to help! 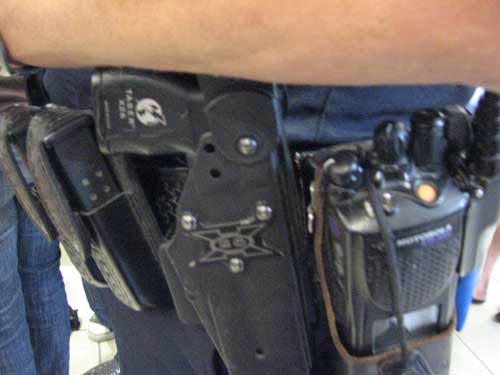 Slowing down I turned the band. A car was standing on the shoulder of the road, a young woman lying on the ground next to it, another, standing above her, was waving frantically. I slammed on the break. Leaving my nine years old daughter in the car, my wife and I ran to see if we could help.

The woman on the ground was having a seizure. I turned her to her side, sent my wife to bring a blanket from the car, and send her mother, the waving woman, to park her car out of harm’s way. Nobody else stopped. The mother called 911.

I cleared the girl’s airway; my wife taking down notes on the time and pattern of the seizure (a necessary information for an investigating doctor). A police car arrived and stopped a few yards away.

“Who are you?” the policeman asked.

“I saw the woman on the ground, and stopped to see if I can help. That’s my car over there” I said, pointing to my car 20 yards away.

“Who is that woman?” the policeman asked, pointing at my wife.

“Get the fuck out of here,” the policeman ordered.

“I am a train paramedic, and she is a registered nurse. The woman is suffering a seizure. We should wait until the ambulance arrives.”

“Are you arguing with me? I told you to fuck off,” the policeman raised his voice.

“OK, we are leaving. Here are my notes for the doctor,” my wife said, trying to hand the policeman her notes.

The woman on the grounds was having another fit, the mother was trying to give her water – which can be fatal in this situation – and the policeman’s hand was moving towards his holster.

Having just seen the recent videos of police shooting unarmed people, I raised my hands and stepped backward. “Don’s shoot,” I said. We are leaving.

The mother was begging for help. But it was not the job of the policeman. He only made sure we entered our car and did not return.

“Why was he shouting at you?” my daughter asked when we entered the car.

“Because we were trying to help,” I said.

“But what’s wrong with trying to help,” she would not let go.

Somehow, without thinking, regretting my words as they came out of my mouth, I said, “In America, trying to help, disturbs law and order.” What else could I say?

My daughter looked back at the policeman, who was still standing away from the girl on the ground, not bothering to look at her. “So why don’t we go somewhere else?” my daughter asked.

"Just stay away from the police, and all will be fine," I lied.

“Let’s have lunch,” my wife intervened.