NEW ORLEANS — Nearly five years after hurricane Katrina, New Orleans continues to rebuild city structures such as schools, homes, recreation centers, and roads. But as Drew Brees, quarterback of the New Orleans Saints, (Saints) toured New Orleans during his recruitment trip, he discovered that the challenge entailed more than rebuilding a team. It meant helping to rebuild a city. 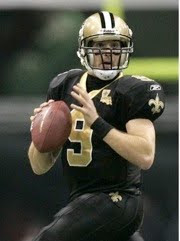 "This is where I belong," Drew Brees said. "And it felt like this was a calling."

Brees set the standard from day one. Its charity, The Brees Dream Foundation, immediately expanded outreach from the Layfayette/Purdue and San Diego communities to include New Orleans. The mission is to advance research in the fight against cancer and provide care, education and opportunities for children in need.

Since 2006, Brees has donated $4.5 million of his own money into The Brees Dream Foundation. And in addition to funding, Brees makes weekly appearances at community events and in classrooms. It helps connect him to and spend time with kids.

"It sends a really big signal that he's made himself a citizen of the community," says Errol Laborde, editor of New Orleans magazine.

Since, asking his fellow teammates to join in on charitable endeavors hasn't been difficult. One such opportunity came when local teacher Brian Bordainick, a teacher at George Washington Carver High School, asked the Saints to help with the school’s athletic program. The entire team helped, along with a personal commitment from Brees.

"Drew [Brees] didn't just cut a check," said Bordainick. "He came down to the school, toured the site, found out what was going on, and even followed up with e-mails afterward seeing how it was going."

Even after his recent Super Bowl victory, Brees contacted Bordainick again. This time, Brees had some ideas on how to raise more money for the school's athletic stadium and track. The result: an additional $15,000 with text message campaign, raising the total amount raided to $1.2 million.

Scott Fujita, linebacker of the Saints said, "...I've never been somewhere where players were so invested in it, where they spend so much time and so much money trying to help people. It's not just donating money to the United Way. It's players on the ground with hammers, helping build homes. The connection between players and the community here, it's unparalleled."

Alongside millions of dollars donated to charity efforts every year, Brees delivers integrity, respect, and devotion on and off the field. By investing in children and the community alike, Brees demonstrates the value of social advocacy as an individual and proud member of the New Orleans Saints.