The dayroom at the Road Street estate was sparsely festooned with a few balloons and ribbons. Several octogenarians slowly milled about.
A pudgy Armenian proudly lorded over his victual presentations at the far side of the room. 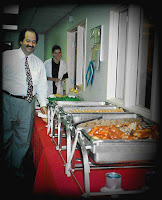 Steam tables offered a strange “cream salad” embedded with olive slices, “Keystone style” barbecued chicken, and an odd display of ‘naked’ frankfurters stacked like cordwood.
Courier One was able to make the event from the Deep South to see his aunt — Miss W — in whose honour the reception was being held. Miss W herself stood there expressionless and mute — the results of a recent stroke, alas.

Appreciation was duly given to one Frau Blöb, for her assisting Miss W in her disability was both kind and patient.

Courier One and his aunt posed whilst Frau Blöb took their picture. Miss W stood rigidly in a white blouse, plaid skirt and knee socks, bringing to mind an incongruous image of an elderly woman dressed as a Catholic schoolgirl.

Some years later, Miss W sadly passed away, and Courier One came back with Stoddard in tow to Road Street to settle her estate. In her quarters, they went through sundry personal items with mild curiosity tinged with a bittersweet sense of a person’s life path as told through the span of years by their personal possesions:
An old hairbrush, still holding auburn strands.
Her deceased sister’s voter registration card, faded and crumbling after fifty-odd years.

A written request to have her cat “Timmy” (who was nowhere to be found) to be donated to the local shelter.

On an endtable stood a rickety nutcracker with a broken arm, heavily caked with dust. A silent sentry, or a no-longer-useful totem that had been clung to over the years.
Though Miss W’s parents were from the Old Country, and thus of the Old Religion, there was a poignant irony when Courier One pointed out, “She always did like Christmas... year ’round.”