DVD Break - The Place Beyond the Pines 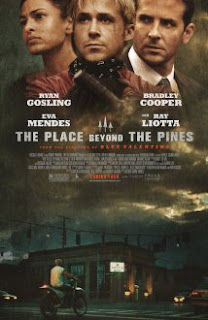 I didn't know much about The Place Beyond the Pines before I watched it, and I'm glad. I've since seen it described as "three related stories," and that might have been enough to bring to mind something like Crash and convince me that I really didn't want to see it. Generally, those device-driven "our lives collide" type of films leave me cold because we just don't get to develop enough attachment to any one character or see enough evolution.

On top of that, I fell asleep during Blue Valentine and never bothered to go back and watch the second half, so I wasn't eagerly awaiting Derek Cianfrance's next creation as many people seem to have been.

The film does, in a sense, tell three stories (though I'd suggest that the third is offered less for its own sake than as a full-circle sort of closer to the first two), and I found the structure within which that happened very interesting. I also came away with a strong enough sense that it shouldn't have worked that it, too, might have discouraged me from seeing the movie. But I didn't know, so I sat down and watched and it worked. It really, really did. It actually took me a few minutes after the first transition to realize that the story had evolved so far that we had a new main character.

Just hours before we watched the movie, my daughter had been lamenting the fact that Bradley Cooper so rarely acts--that he's capable of performances like the one in Silver Linings Playbook but chooses some of the substandard rom-com stuff he's done annoys her--but she took it all back by the end, and Ryan Gosling turned in an outstanding performance in a role that didn't let him rely on quips and charm.

I'm not going to say too much more, because I really did feel the experience was enhanced by not knowing what to expect, but if you read one of those "loosely connected stories" reviews and you've been on the fence, hop down and go rent this.