East is East and West is West

The Roman Catholic lists rarely mention beards, for one thing, which this humorous, but fairly historically accurate account of the split of 1054, does not omit: The Beard-Battle that Almost Split Christendom | The Local Church:

[Cardinal Humbert] excommunicated half of all Christendom—for having beards.

Sort of. See, what happened was this: On July 16, 1054, Humbert interrupted the patriarch in the middle of conducting the divine liturgy to serve him a papal bull of excommunication. The bull in question cited numerous offenses committed by the Eastern Church, including allowing priests to marry (which they didn’t do), re-baptizing Latin Christians (which they also didn’t do), and omitting a clause from the Nicene Creed (which, you’ll recall, had actually been added unilaterally by the Western Church). Oh, and the kicker:

And because they grow the hair on their head and beards, they will not receive in communion those who tonsure their hair and shave their beards following the decreed practice of the Roman Church.

That’s right. Worst of all, those Byzantine Christians grew beards—and, according to the bull, they denied Communion to men who shaved, too. (The Roman Church had banned beards in 1031, only a couple decades before Humbert excommunicated the East for not following suit.)

Go on, read the whole article. It’s funny, but it also gives you a fairly good idea of what actually happened. Take the mentions of “Byzantine” with a pinch of salt — that’s a later anachronism.

But this post is not about 1054 and all that, but rather on the differences in the lists of differences.

Here are three lists of differences:

Check the lists for similarities and differences, but I think you will see that the lists of differences differ as much as, if not more than, the differences themselves.

Why be so negative? Why focus on differences? Why not concentrate on the things that unite us instead.

The problem with that is that even if we did that, we might end up arguing about the things that unite us, because we tend to approach them from different points of view, as the article in The Economist makes clear. Also, the Roman Catholic Church is bigger than the Orthodox Church, so if there is any reunion scheme that ignores the differences, the Roman Catholics will simply assume that their way is the norm, and that takes us right back to 1054, because that is exactly what happened then, and there’s not much point in just going round in circles and getting back to where we started.

So look at the headings of the two lists:

See what I mean?

The first three items on the two lists are completely different, and it is only in the 11th item on the Orthodox list that there is any overlap — on Purgatory.

The second item on the Orthodox list, The Development of Doctrine, is explained succinctly in the article in The Economist:

The West developed the idea of purgatory and of “penal substitution” (the idea that Christ’s self-sacrifice was a necessary payoff to a punitive Father-God). Neither teaching appeals to Orthodox Christians. The East, with a penchant for mixing the intellectual and the mystical, explored the idea that God was both inaccessible to human reason but accessible to the human heart.

And that gives a clue to another significant difference.

It is also worth noting that the list from The Crux is very diplomatic in its wording. It refers to the primacy of the Bishop- of Rome. Many other Roman Catholic lists refer to “Papal Primacy”.

At this point I shall get anecdotal, and indulge in a bit of narrative theology. 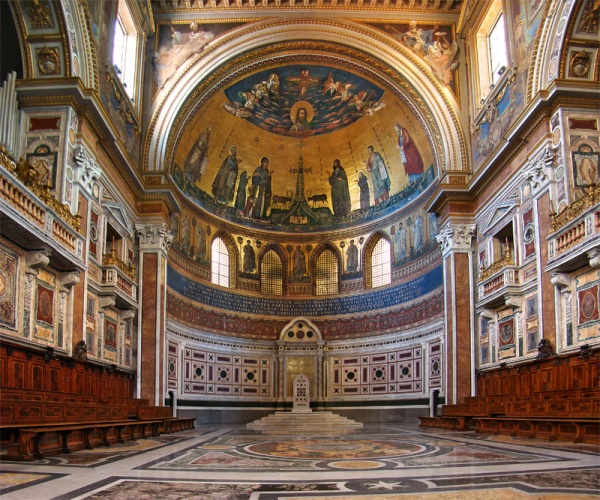 St John Lateran, the Cathedral of the Bishop of Rome

As many readers of this blog probably know, I used to be an Anglican, and back in the 1970s when some Anglicans were disturbed by some theological trends in the Anglican Church and were thinking of leaving, an Anglican priest in Umtata (Mthatha), the Revd Walter Goodall, wrote an article in a publication (I forget which)  suggesting that such disaffected Anglicans could find a home in the Roman Catholic Church under the Pope of Rome, “who is, after all, the Patriarch of the West”.

I replied to him, pointing out that we lived in Africa, not in the West, and that Africa was under the jurisdiction of the Pope and Patriarch of Alexandria and all Africa.

His Beatitude Theodoros, Pope and Patriarch of Alexandria and all Africa, gives an award to Kirill, Patriarch of Moscow, who was visiting Egypt.

He responded rather sarcastically, asking “haven’t you heard of Universal Ordinary Jurisdiction?” I had to admit that I hadn’t heard of it, but also that I didn’t like the sound of it. I lived in Africa, and if I was going to leave a church that defined itself by communion with a bishop in Canterbury in England, I’d prefer to move to a jurisdiction that had been the focus of African Christianity since the first century than to an Italian one.

I’m not anti-Roman Catholic. I’m not one of those hyper-Orthodox who regard the Roman Catholics as “heretics” — I believe you have to be Orthodox before you can be a heretic; you have to be a communicant before you can be excommunicated. I think the current Roman Pope Francis has said some cool things, and that we can certainly talk to each other and maybe do some things together. But I think reunion is a long way off, and we need to take the differences seriously and not just sweep them under the carpet. And even if we do, we need to be aware that we are sweeping them under different corners of the carpet, or perhaps under different carpets altogether.

At one time our parish in Brixton, Johannesburg had a priest seconded from the Orthodox Church in America. A priest from a neighbouring parish once said to me, “You are bigamists! You have two bishops!” And the local bishop explained to him that we were not bigamists, that the American priests were here with the blessing of the Pope in Alexandria and the local bishop. But if we were suddenly to reunite with the Roman Catholic Church, perhaps we really would be bigamists, having two popes, one in Alexandria and one in Rome. And which one would have the primacy then? Perhaps we should say that we’ll cross that bridge when we come to it, but it looks to me that there might be two bridges, and perhaps even two rivers.

We need to look at the differences before we get to that bridge.