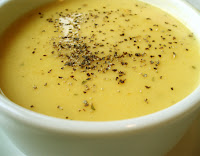 Today's recipe is cashing in on the harvest of corn that occurs this time of year.  And leeks, onions and garlic I suppose.  Leeks, though, are not an easy crop to grow.  I recall my inlaws digging up their leek bulbs at the end of the season to bring in to store... much too fussy for the likes of moi.  Happily, someone out there has a great system for growing leeks and they do turn up in our produce sections, don't they?

This is what I would call a "fresh soup"-- not raw vegan, because it is boiled, but fresh-tasting because the heck is not boiled out of the fresh kernels that are added after the first go-round simmer of the leeks, garlic and onion.  Instead of milk I am using Coconut Milk with olive oil added.  I think it provides a much richer and delicious flavour, but if you want milk, go back to milk.

*Combine the Milk Mix with the Leek, Onion and Garlic and bring to a boil. Turn the heat down to simmer and cook for two minutes.
*Add in Corn Kernels and simmer for another ten minutes.

This delicious soup is quite thick, so if you wanted to make it more chowder like you could just whirl up some of the soup (maybe a cup) and re-add it to the other soup as a thickener.