Eat, Pray, Love and our perpetual pursuit of happiness

You guys in America are always on the treadmill wondering ‘How can I actualize myself?’ while most of the world is running to dodge bullets. 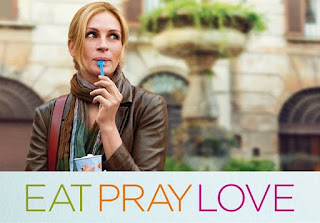 If you are ever uncertain whether there’s enough hatred in the world, visit the Amazon.com review page for that inescapable book and soon to be movie Eat, Pray, Love. One reviewer calls Elizabeth Gilbert “the most self-important, obtuse, boorish, annoying cretins ever to put pen to paper.” Another says that the book “epitomizes everything wrong with American culture today: worship of the mediocre, travel without seeing anything, polarizing of the Other and fake spirituality.” People who love the book really, really love it, and those who hate would like to enter the world of Farenheit 451 just so they could see it go up in a fiery blaze.

Whether you like or hate the book, it brings up some interesting questions. To what extent do we have the right to pursue happiness? Is pursuing our own happiness inherently selfish? Does being wealthy make your problems less valid? Can rich people truly “suffer?”

The first question, about our right to pursue happiness, is a uniquely American question. Other cultures just aren’t very worried about such a trifling matter. In Russia, it’s considered impolite to answer “good” when asked “how are you?”–to do so is to be bragging about your good fortune and putting the other person down. In South Korea (so says a lovely and talented political blogger for this very blog), it is much more important to be fulfilling your duty and bringing honor to your family than to be gaining any sense of personal fulfillment.

But Elizabeth Gilbert is an American, and thus views it as a given that she has the inalienable right to pursue happiness. As a suburban New Yorker, she is unspeakably depressed, and decides to go on a year-long journey through Italy, India, and Indonesia in search of the personal fulfillment that has eluded her. Right from the get-go, plenty of people hate that this–a year-long and wildly expensive journey — was her solution.

What gives her the right? (Other than our own Declaration of Independence, I presume.)
Other people, who might forgive her for the trip itself, despise her because, as she admits, it was made possible by a massive advance from her publisher to write the book. She was able to travel for a full year without needing to work, a luxury that few people in human history have had. Does that negate her whole experience? It does to many. Others just hate that she didn’t do any volunteer work or share her money and instead chose to spend it on gelato and meditation retreats. It’s not the travel alone that bothers them–it’s that she saw the world but didn’t improve it.

But what would she have been doing for the world without her travels? Can anyone really argue that it would have been better for her to continue to be crying on her bathroom floor? Who was she helping there? As it is, she has written a book that, like it or not, has given many people insights into themselves and their own lives. No, it’s not the same as curing homelessness or cancer, but it’s something.

We all know, in theory, that money doesn’t buy happiness, yet we still seem to believe that if someone has money, their unhappiness can’t be valid. America, the nation with many of the world’s richest people, also has one of the highest rates of depression. Why? Because, after a certain threshold (a salary of about $70,000 a year), money does diddly squat for a person’s level of contentment. The problems facing the rich and the poor are different, but it’s not really possible to quantify some unhappiness as “important” and other unhappiness as “trivial.” From reading the book, I believe that Elizabeth Gilbert really did suffer, and I can’t begrudge her the fulfillment that her year-long journey provided.

The movie is coming out in just a few days (August 13th), and whether or not you hate the book or love it, whether you are feeling wealthy or destitute, it couldn’t hurt to stop and ask yourself, “Am I happy?” You don’t have a right to happiness, but, no matter who you are, you always have a right to pursue it.
Picture from Cinema Blend

Sarah McCarthy is a blogger for My Dog Ate My Blog and a writer on online degrees for Guide to Online Schools.