The Eeries Roar Past Some Cool Kids 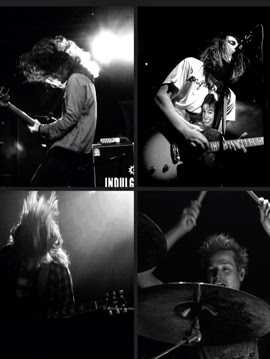 Maybe one of the hardest things about being a musician is knowing when to start over and, more importantly, who to start over with. There are dozens of breakout bands that bust up out of the starting block because some members aren't ready to wreck themselves on the road most take to get there.

It's also why singer-songwriter-guitarist Isaiah Silva didn't want just anyone who was trying on the musician moniker for the first time when he founded The Eeries. After investing 16 years in music, some of it as a cathartic sense of self-expression to help him survive a turbulent childhood, he wanted to surround himself with seasoned players. Who can blame him?

"We've all had our bands and worked our assess off touring and sleeping on hardwood floors for 120 days out of the year in a shitty band, in snowy weather, with a trailer driving from fucking Colorado to fucking North Dakota for 15 hours, drinking NoDoz," says Silva. "We've all done session work for other bands. We've all been hired guns. Each of us has done it all. That's how I knew these were the right guys."

Those guys include guitarist Brandon Sweeney, drummer Nadir Maraschin, and bassist Eliot Lorango. And not only had they lived music, each of them was also keen on reviving the golden era of guitar-driven alternative rock with an urgent swirl of punk-infused dream pop. It's a great wake up.

After spending two years together, their first real break came when alternative rock radio station KROQ sampled Cool Kid as a new music feature. The initial spin landed it on another prime time spot where listeners voted it up to earn a place on the station's official playlist. It was just like that until Interscope scooped them up (but not before they already finished recording a self-produced debut).

Cool Kid has turned plenty of ripples into waves. Check out this live session via Jam In The Van or live via Late Night with Seth Meyers. Either cut will easily prove the band deserves a deeper listen.

The track tackles the common angst-filled inspiration of being on the outside looking in — a relentless feeling that is especially poignant in an era when it's cool to be uncool. Or maybe it hits home simply because nobody really knows what cool means anymore. It's all as artificial as Aspartame.

Not wanting to miss out on the momentum of the lyric-light but pointedly poetic single, Interscope green lighted the first five tracks (including Cool Kid) on self-titled EP. The four new tracks make the case that The Eeries aren't one-trick ponies. The self-titled EP rips through an impressive set of perfectly balanced rockers that were recorded analog style, live to 2-inch tape in Los Angeles.

The tracks all stem from personal events, ranging from what happens when you live most of your life on the road or fall in love with someone or unexpectedly break it off. Silva writes down whatever life throws at him and then matches it to the right melodies. And then they lay it down raw, flaws and all.

The rundown on the EP is inspired, with no wasted minutes. Girlfriend fires up some prickly dance punk with a nod to the 80s. Love You To Pieces resurrects some garage grunge with an art pop twist. Shine On, a favorite track contender, blends in some psychedelics. Overrated dances around a Beatlesque inspired mashup of melodies, making the perfect bookend to a memorable EP.

The Eeries EP Rocks Out 8.8 On The Liquid Hip Richter Scale.

The Eeries EP is easily the best EP debut of the year. The band makes it even better because they self-produced it before they were signed. Add in some old school production savvy and it isn't hard to see why The Eeries haven't cut an EP as much as they have a career. It will likely get better from here.

You can find The Eeries EP on Amazon. The tracks can also be downloaded from iTunes. Interscope Records was smart to snap them up, adding a little more indie diversity to their growing alternative rock roster. The full-length album is anticipated to land in early 2015. The band is currently putting the finishing touhes on their work.