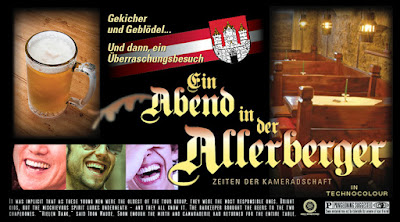 DATELINE: Old Salt Town, Stratum XI-XII — Those furley seniors really thought they were pulling one over on the chaperones.

It was a rustic tavern at the inn with stony walls and raftered ceilings. The chairs and tables were hewn from sturdy oak with Old World charm. It was here that the underage students had snuck out to for a few steins of lager. That there was no drinking age here bolstered the young Seppos to step out on their own.
Mirth and camaraderie ensued.

But the jaws of the lads dropped when “The Iron Maude” and Radulphus walked into the bar.
Were the guys going to get in trouble? Detention abroad? Sent home from overseas? A semester failed?
They were sweating it out.

But the two chaperones simply ordered beers and nonchalantly joined the young men at their table, treating them as fellow adults. Which they practically were.
It was implicit that as these young men were the oldest of the tour group, they were the most responsible ones; the chaperones could afford to give them the longest leash. After all, these students had the best grades, had jobs, and had already come halfway around the world.
Bright kids, but the mischievous spirit lurks underneath — and they all know it.
The barkeeper brought the beers to the two chaperones.
“Vielen Dank,” said Iron Maude.
Soon enough the mirth and camaraderie had returned for the entire table.