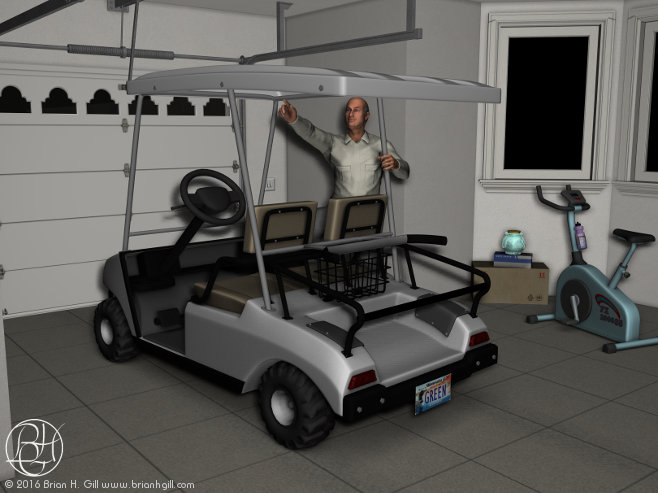 When gas went over three dollars a gallon in late 2006, Elton Baum decided to do something about it.

"I couldn't keep the price down," he said with a grin, "but I could do something about how much I used. Now, I don't go into town with the truck, unless it's for something really big."

Even a small car uses some gasoline, so Mr. Baum looked around for an alternative.

"About a year ago, I found a golf cart. Trouble was, I couldn't drive it on the roads except in daylight, and in good weather. Makes sense, but I wanted something where I wouldn't be stuck in town, or out here, if it started raining."

Elton Baum's golf cart looks about the same as it did when he got it, except for an extra bar across the back and license plates.

It's what you don't see that makes it special.

Under the seats, ten golf cart batteries take five or six hours to recharge. "Four, if I'm lucky," Elton said. He doesn't use a pedal generator to recharge his cart. "I thought about it," he said, "but … life is too short to spend that much time cycling."

A beefed-up suspension and high-performance motors boosted the golf cart's top speed to about 40 miles an hour, so Elton doesn't need a slow-moving vehicle sign. He does, though, generally wear a motorcycle helmet when he drives. It's safer, but that's not the main reason.

"It gets breezy, driving with no windshield."

Posts that probably aren't entirely unrelated to this one: