Monday (12/17): Since last I posted about my new memoir, I 've gotten lots of comments suggesting that I emphasize the sensational parts of my story, such as my mother's relationship with a member of the Purple gang during the 1920s and the incidences up in the mountains of North Carolina when my grandpa and his bothers were making Moonshine and running from the revenue agents. (I love long sentences!)

I am not averse to hanging out my dirty laundry, as I've learned that my family is not much different from most. We all have our dirty little secrets we'd rather not disclose, but it's important to me as a writer of memoir to be honest and authentic. Not that I'm looking for shocking events from my family's lives to expose but, if it's an integral part of the story, I do not want to be afraid to write about it. 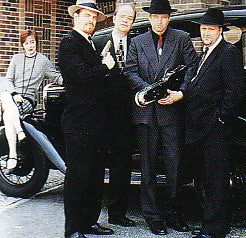 The Purple gang connection has piqued my curiosity. In addition, I received an email from the brother of an on-line writer friend, who is writing a book about that era and the gang. He wants to exchange information, and I'm tempted to do so, only I really don't have a lot of information. So, I've decided to do some research about how my mother met this person, where she was living, and what she was doing at the time.

Tuesday (12/25): I've started my research on the "Purples" and, honestly, what I've found so far is somewhat frightening. I'm not sure I want to pursue this. And, I can't believe my mother would have been involved with a man who was part of this gang.  She was a gentle person, beautiful and loving. At least as far as I know. But I only really "knew" who she was, after I became an adult. Before that, I saw her through the eyes of a child.......(more later)

Saturday (12/29): With Christmas over and my family gone, I've returned to my research. I'm going to give it another try even though the last exploration turned up some awful things about the Purple gang that turned me off temporarily. Today, I'm trying to figure out how and where my mother met her gangland boyfriend who, according to my sister, wasn't her boyfriend for very long.

Seems my grandmother was in the room when my mother received a Christmas gift from him. It was a huge box that contained a sable coat with a diamond ring in the pocket. Guess the family, including my mother, had thought he was a nice young middle class boy with a crush on their daughter. When Roxie (my grandmother) saw the coat and ring, she freaked out and made my mother send it back and break up with him. Roxie, the matriarch,  always had good instincts and suspected immediately that he was part of  the Purple gang which, at that time, was running rampant in Detroit. Guessing again,  he may have looked like someone she saw in the newspaper.