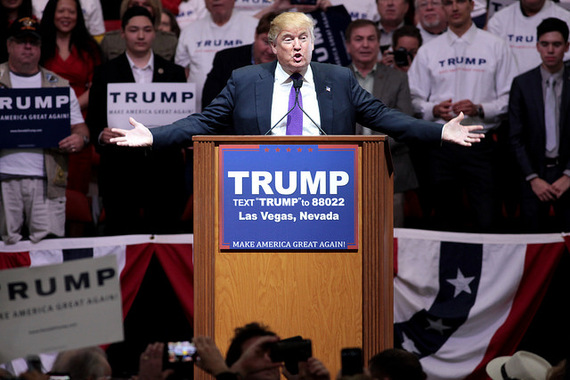 My oldest daughter's high school assignment forced her...I mean, required her to watch the presidential debates. I managed to avoid all of them, choosing to watch the more entertaining, though not much embellished, versions from Saturday Night Live.

This third debate, however, was harder to escape. I passed back and forth through the living room on my way to somewhere else - anywhere else - only to hear ridiculous, childish snippets from Clinton's opponent. I felt I'd heard this before; if not the words, certainly the tone. Then it hit me. I proclaimed to my daughter, "It's your sister!"

Without an explanation on my part, she said, "Yes! That's it!" Donald Trump reminded both of us how my youngest daughter would deflect the attention away from herself whenever she was cornered. Rather than addressing her own behavior, she would yell, "Well, Caitlin..." (her sister), or "Well, Mommy..." or "Well..." anyone else she could think of to draw attention away from herself and escape facing her own actions.

Again, while I've tried, and mostly achieved, avoiding mainstream media during this campaign, I've still caught Trump and his supporters deflecting from Trump's outlandish words and outrageous behaviors by saying things like, "Well, Hillary Clinton..." And they say it with as much maturity and venom as my, then, 7-year-old daughter.

When Trump's campaign manager, Kellyanne Conway, was asked to respond to Trump's vile diatribe about sexually assaulting women because he's a star, she quickly turned the table to talk about how Hillary Clinton treated women with her policies. While this may, or may not be true, her response didn't offer any insight, or explanation of the candidate himself. It simply glossed over the question by attempting to focus the attention on someone else.

Life coach, Patty Blue Hayes, says, one of the ways emotional manipulators work is to "point out the things you did to justify their reasons to pull away, be mean, act insensitively or yell at you." Deflection shows a lack of emotional intelligence, or "the capacity to be aware of, control, and express one's emotions, and to handle interpersonal relationships judiciously and empathetically."

Most thinking people have stood on the sidelines of the Trump campaign, wondering how people could blindly follow his nonsensical speeches, pre-pubescent boasts, and manically inflated ego. To date, I have never heard any of Trump's supporters address any of Trump's issues, or explain how they think he will do the things he says he will do. Realistically, he won't be able to follow through with any of his campaign promises because they are impractical, unconstitutional, illegal, or all three. Instead, his followers inevitably point to Hillary Clinton, the "liberal media," or the "rigged system," as the reason for their dying devotion to Donald Trump. Facts and reason be damned.

Author, Fabida Abdulla says, "Emotional manipulation results in a negative and toxic environment, where the manipulated person is stripped of their self-confidence and sense of self-worth." The emotional manipulator, on the other hand, generally reacts out of fear. Radio host and author, Melanie Tonia Evans, says this fear translates into, "I am not worthy of life working out for me, and I am not worthy of life and other people having my best interests at heart."

Not surprisingly, Trump and his supporters are primarily those who fear life is not going their way and they believe "others" are to blame. Whether it's the media who doesn't give Trump enough press (though, they gave him $2 billion in free advertising), or immigrants who are bad for the economy (though, the benefits actually outweigh the costs), there is little reflection about what they believe and why.

Emotional manipulators twist words, reason, and common sense as a way to gain power and control, and confuse people they want to manipulate. They are generally unable to separate truth from fiction. Even then, it is only truth as they see it. Donald Trump's proclamation that his modesty is his best quality, "even better than my temperament," is a joke to everyone, but Donald Trump. He has created an alternate reality in which he and his supporters find solace from the rest of the world.

While it's alarming, disturbing and even a little frightening to watch such an emotionally manipulative presidential candidate, it's terrifying to know there are millions of people who feel they have no control over their own lives, and believe the rest of the country is out to get them. Trump has uncovered, unearthed, and unhinged a disenfranchised group of citizens who are used to being manipulated by their own fears. Regardless of the outcome of the election, the consequences of Trump's irresponsible coercion could have devastating effects.