I had a hell of an experience last year when I tried bungee jumping for the first time in my life in Phuket, Thailand. I had always wanted to try out bungee jumping, at least once in my life, before that. When I was in Phuket last year, I happened to come across World Bungy at Patong Beach, Phuket, Thailand and without thinking twice, I went for it! The rest is history! I must say it is truly an eye-opening (or were my eyes closed) experience. Everything happened in a flash and so fast that before I knew it, I was already bouncing up and down like a Yo-yo.

The owner explained to me the procedure, process and charges for the whole bungee jump. I remembered signing up some declaration forms stating that I was in the sane mind and physically fit to take up the jump. After making the payment, the owner told me that I can take a look at a jump first before deciding that I will surely go for it.

My friend and I proceeded to a clearing where we could see someone preparing for the jump. The crane took the person up to the 60m height and we saw the man standing at the edge of the platform. He was looking down at his friends who were shouting to him in a language that we did not understand. The shouting went to and fro for about 5-10 minutes and I guessed the man was thinking too long that he did not jump in the end. As we watched, the owner said to us, "He should not have looked down and should not have waited too long to take the leap. The longer you wait, the harder it will be for you to make the jump. So when you are up there later, don't think too much and just jump."

After witnessing the failed jump, the owner asked me, "Are you still going for it?" "Yes!" I affirmed. Looking at the pond below the jump, I asked the owner, "Will the jump takes me into the water or it'll be out of the water?" The owner replied smiling, "Do you want to be in the water or out?" Looking at the dirty pond, I laughingly replied, "I want to be dry!" 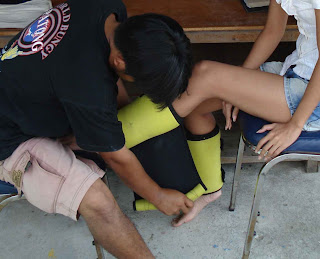 The preparation for the jump took about a short 10 minutes or less. First, my weight was taken and then written on my palm. The staff then carefully tied up my ankles with sort of a protection before they asked me to kangaroo-hop to the crane that will bring me up to the height of 60m for the jump. I would say I was a pretty good and obedient student; I followed their instruction almost perfectly. The owner of the establishment told me again, "When you are up there, don't think too much and don't look down." That weren't too much information to remember too. 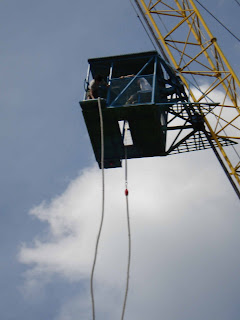 I still remembered on my way up to the jumping height, I was talking to the staff that was going up with me and he was giving me the last set of instruction. "When you are up there, you will move to the edge of the platform. When I say 'ready,' you will echo back 'ready.' Then I will count 3, 2, 1 and you will jump out of the platform with your arms opening wide like a cross." He said. I went through the instruction that he had given me in my head and I pictured myself doing the jump. It is too late now to give up the idea of jumping as I remember a few words the owner told me, "No jump, no refund!" 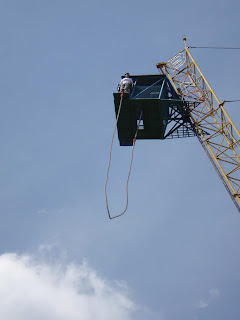 It took the crane about 5 minutes to reach to the height of 60m and I did a kangaroo-hop to the edge of the platform.Standing at the edge of the platform and holding on tightly to whatever I can hold on to. I was waiting for the staff and I took a quick look downward (so I wasn't exactly obedient but I wanted to see how high I was and how it looked downward at this height). Somehow, my friend and all the people below looked smaller and I can barely hear what my friend was shouting. I brought my head back to the horizontal level and took a glance at the scenery in front of me. The staff shouted, "Ready?" I echoed back, "Ready!" He then counted down, "3 ... 2 ... 1 ... jump!" 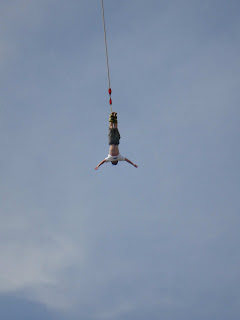 And I hurled myself forward and out of the jumping platform. That split seconds of falling and for once the clock stopped ticking and I could only hear myself screaming, "Woooooooooohhhhhhhh!" I was already reaching the ground. What followed was the dangling action like a yo-yo for about a few minutes before coming to a stop.

I was 'fish' to back to the ground with a bamboo pole and I gladly grabbed the pole. The staff pulled me in to a platform besides and pond and untied me from the support. What an exhilarating experience! Yes! I had finally done my bungee jump! What's next? Skydiving? Maybe.

When I was back at home and some of my friends gotten to know of my jump, they were saying I must be crazy ... who in the world with a sane mind would do such a thing. Maybe they are right ... but I know that bungy jump, although it seem like a dangerous activity, is safer than driving to a large extent.