The Farm Toils Perception And Paranoia When Daniel first received word from his father that his mother had been hospitalized, he suddenly felt dizzy, a wave of nausea overcoming him as he dropped his grocery bag. He immediately knew something was wrong, but as his father continued to cry into the phone, hardly making sense, the details grew even darker.

His father recounted how his mother had been imagining things, terrible things, for several months until she had finally suffered a psychic break. He had no choice, he continued. For his safety and hers, she had to be committed.

A psychological stint into perception and paranoia.

The news was especially shocking to Daniel as his parents had just recently retired to a farm in Sweden. Everyone had considered the move the adventure of a lifetime, especially because his mother had been born there. She had told him so herself, sending him emails rather regularly.

She did, that is, until the last email. All it had said was "Daniel!" and nothing else. Daniel had explained it as a glitch. He had even sent her a quick response back, asking her to resend it. She never did, but he assumed she was too busy with whatever one might expect on a farm.

He was wrong. And when he had finally come to terms that he was wrong and booked his flight to join his father in Sweden, he turned out to be wrong again. His mother wasn't at the hospital, but on a flight from Sweden to London. She called to tell him and warned him not to believe his father before the call cut off.

Unsure of what else to do, he did the only thing he could do. He met her at the airport, brought het back to his apartment home, and listened to her as she began to outline a conspiracy to cover up a crime, one that his father had been complicit in and, if not, an active participant.

The initial accusation was almost more than he could believe, compounded by her insistence that he listen to her story not as a summation but in sequential order while she produced scraps of evidence and her own journal entires to corroborate not only her story, but also her sanity. Even more pressing, she needed him to listen before his father and the men who had coerced him found her again.

Her story titters back and forth between plausibility and paranoia. But even as those odd and inexplicable details give Daniel reason to doubt his mother, evidence and events provide enough proof that he is compelled to believe — much like the doctors at the hospital she had fled.

While the conclusion may leave more than one reader wondering why Tom Rob Smith would end on whimper compared to the terse and gripping tale told by an untrustworthy narrator, The Farm revives the author's gift at bringing anxiety to life. As a study into how much perception plays in the reality we make, Smith also entertains with a slow burn story that swirls between trust and disbelief.

A couple graphs about the author Tom Rob Smith. 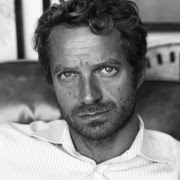 After his sensational breakout novel Child 44, based on a real Russian serial killer known as the Rostov Ripper as seen through the eyes of his fictional MGB officer Leo Stephanovich Demidov, Tom Rob Smith delivered two more novels that took readers deep inside Russia. While the sequels were welcome, the trilogy sometimes suffered as reviewers continued to hold each book up to Smith's smashing near-perfect debut.

Where The Farm becomes an exceptional win for the author is when it treads some new ground, shaking off the trappings of the trilogy. While some similarities remain — Smith's vividness in describing the bleak wilderness of the mind as well as the landscape — the subtlety of this Cambridge graduate's craft has grown tenfold.

The Farm By Tom Rob Smith Steals 8.7 On The Liquid Hip Richter Scale.

As long as readers are willing to forgive the whimper of an end in advance of starting the book, they will discover that the ride can indeed be better than the destination. This is an amazing portrait of justifiable paranoia that resurrects the old saying — it's not paranoia if it's true.

The Farm by Tom Rob Smith is available from Amazon. The book can also be downloaded for iBooks or ordered as an audiobook. You can also search for The Farm at independent bookseller Alibis and take free shipping on select titles.