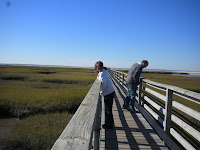 It's been nearly a year.  Time is a funny thing, in that you can't catch it up. Last October I was in a cottage on Cape Cod, the two most important people in my life close at hand. 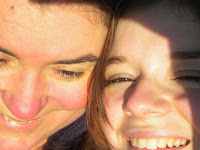 Tori and I took our coffee out to a small playground on the grounds and worked on a book together.

I saw the ocean every day. 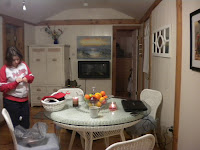 I worked, when I needed to, in a sunny kitchen with ever-present traces of sand on the floor. 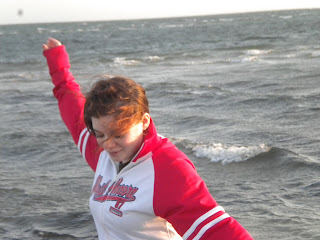 We went to Salem. 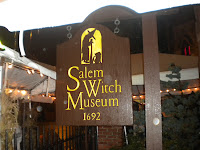 We visited three of my oldest friends, in three different states, and stopped to breath in the mist of Niagara Falls.

Then, in November, our lives collapsed. During those long months of illness and uncertainty, I often couldn't work at all. When I did, it was in tiny bites, on the most superficial of projects. Christmas came and went with little observation; it was only acknowledged at all because my beautiful daughter went into the storage under the stairs and decorated, inside and out, while I slept.

Then, springtime came and went. No long walks and badminton games in the yard this time around. We didn't ride our bikes to the park in the next town as we had last year. Jake loves spring, but those days slipped by with very little outdoor playtime.

In June, seven months in, I started to feel better. Not good, but well enough to function. But, by then, we were in deep.  Seven months without income took a serious toll, despite the generous support of some of our closest friends.  Tori had done her best to keep the house running smoothly, but it was new territory in a time of stress. I re-emerged at half-power, into a world of past-due bills, medical bills that seemed to continue to grow, a messy house and a broken down car.

And so, summer passed, too, in an endless cycle of pushing to catch up and then collapsing to recover. My only goal was to avoid falling further behind.

At long last, I'm starting to feel in control. Far from the top of the hole that kept getting deeper all year, but I can see that there's sunlight up there somewhere. But I can't help thinking about that time gone by. I can make up the money; I can catch up the projects; I can get to the bottom of that big bag of non-essential laundry that's collected. In time, all of those areas will return to normal, without a trace.

I'm not usually inclined to think in terms of things lost. It's always a new day, and living in it means not living in the past--whether it's a past you cherish or one you regret. But the season turning back to fall is really driving home the way that chunks of our life can just disappear, and that the world shifts while we're away.

I don't have a lesson learned or a victory at the end of the path for this one. I'm grateful to be alive. I'm grateful to be working again. And I'm grateful that my daughter and I are both the kind of people who still found reasons to laugh and little moments to take pleasure in during this year. But we still missed what should have been my grandchildren's last extended visit before two of them started school. We still haven't been able to travel as the first feature film she appeared in makes the festival circuit. We still missed the last summer road trip before she crossed the line into adulthood. As the days get brighter and we regain our foundations, I'm sure I'll think about that less and less. Eventually, not at all. But it will never change.