Film Review: Fire in the Blood 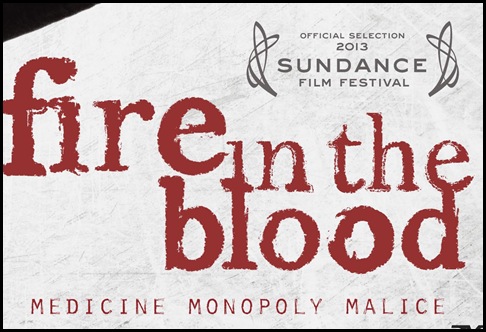 In the summer of 1991, at the end of my first year in university, I went on a course on HIV / AIDS so that I could learn to educate young children about the disease. We talked about prevention, transmission and the lack of a cure. It never fails to confound me that 20 years later we were still preaching the same lessons when ARVs were found to be successful in the treatment of the disease in 1996.

Narrated by Academy Award-winner William Hurt and an official selection in the 2013 Sundance Festival, documentary Fire in the Blood is the story of how Western pharmaceutical companies and governments aggressively blocked access to low-cost AIDS drugs and generics across the developing world at a cost of an estimated ten million deaths.

Shot on four continents and featuring archived footage, Fire in the Blood exposes the fight for people in developing countries to access HIV / AIDS treatment which cost $15,000 a year or an average of $40 per dose. As a point of perspective, the average weekly wage in South Africa, the richest country on the African continent, is $68.

The film covers the patents which prevent the sale, production or import of generic drugs; the pressure on governments to uphold such patents at the threat of trade sanctions; and the propaganda machine that cultivated fear of counterfeit drugs, viral mutations and non-conformity to treatment should drugs be made available in the developing world. 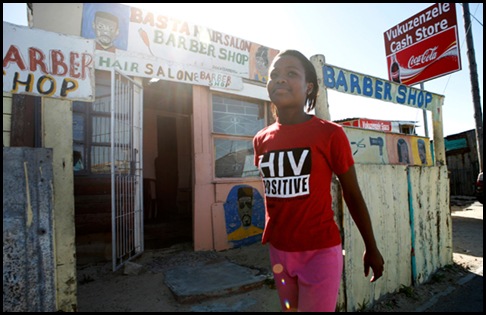 All of this is discussed against the backdrop of the profiteering of pharmaceutical companies and the actual cost of the active ingredients in anti-retroviral drugs and the cost of producing them.

The film discusses the eventual victory that resulted in the President's Emergency Plan For AIDS Relief (PEPFAR/Emergency Plan) and the resulting backlash and extension of the TRIPS agreement which will make it very difficult for such victories in the future.

Pharmaceutical companies might have lost the battle with respect to the treatment of HIV and AIDS but Fire in the Blood concludes that everyday people might lose the war. With more and more Americans reporting an inability to afford medications, will we be able to sweep drug company monopolies under the carpet like we did when it was just third-worlders? 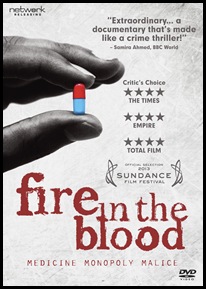 Fire in the Blood is directed by Dylan Mohan Gray and is feature-length at 84 minutes. The pace is fast and the narrative features contributions from Zackie Achmat, co-founder of the Treatment Action Campaign in South Africa, Bill Clinton, Desmond Tutu, Joseph Stiglitz and Yusuf Hamied, chairman of Cipla, an Indian socially conscious generic pharmaceuticals company. The film includes powerful scenes showing the improvements in the lives of individuals in Uganda, India and South Africa once access to anti-retroviral drugs was improved.

Fire in the Blood is a powerful, important film that will be released on DVD in the UK on 24 March 2014. I highly recommend the film and give it five out of five stars. The film has only seen a limited release in the USA despite being prominent in film festivals in 2013.

You can purchase Fire in the Blood from Amazon.co.uk.