For Those Who Have Asked ... 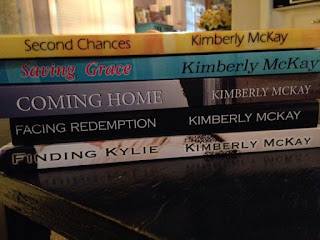 Lately, I've been asked about the order of which my books should be read, so I thought I'd do a quick post here on my blog.

Although I do have four books in a series, it was an accidental series.  When writing Finding Kylie, I honestly had no intentions of continuing the journey for the other characters in the book.  I thought I'd release Finding Kylie and see what else came my way as far as storylines.

You see - Finding Kylie was my 'what if' in life.  It's been said - 'write what you know' - so I did, only I fictionalized my "what if'. After concluding Finding Kylie with a somewhat open but definite ending, I couldn't fathom putting myself in a position to write a story I wasn't  emotionally or spiritually prepared for.  To continue Chastity's story with her father meant stepping into some shoes I wasn't prepared.

That was until I continued to receive emails from readers who were wondering 'what was in John's letter' and 'if Chastity and Timothy lived happily ever after.'  I knew then that I owed it to my readers to write more about these endearing characters with Facing Redemption - even if it meant doing some soul searching of my own to have the capacity to write about John Mikale, one of the main characters in the second book.

By the end of Facing Redemption, I was hooked, and unable to say goodbye to a fun lovable support character, named Anne, who, I felt, deserved her story in a separate book, Coming Home.  I originally wrote her and her sister's story as one novel.  However, by the time I finished, it was way too long.  So, I decided to give each sister their own book.  Hence, the birth of Coming Home & Saving Grace.

So while the first four books are considered part of a series, they could be read independently of each other as well.  For the best reading experience, I would suggest reading them in order.  There is some overlap in Coming Home and Saving Grace (for a couple chapters), however these scenes or chapters are told from each of the sister's own perspectives.

The order in which they should be read is this:

My fifth book, Second Chances (which released in Jan 2016), brings a whole new set of characters to life.  Paige and her journey concluded in one book, so no others to follow with these characters in mind.

Currently, I'm writing Endless Possibilities, which brings a new realm to my writing.  Think afterlife meets the living with a bit of matchmaking from beyond.

If you'd like to read any of the synopsis for my books, you can visit my official author page or my Amazon page.

I'd love to hear from you!  If you've read any of my books, please leave me a comment or better yet a review on Amazon or Goodreads.  Thank you in advance!!!