from ridiculous to sublime

Ever since I posted The Three Immortals two years ago, I’ve been looking for examples of these tutelary deities to illustrate how widely they can vary in representation, and I’m now in a position to present a selection of photos of this trio.

I’ll start with a photo taken in the next village to where I live. The unusual aspect of this example is the uniformity in dress, although red is considered the lucky colour in Chinese culture: 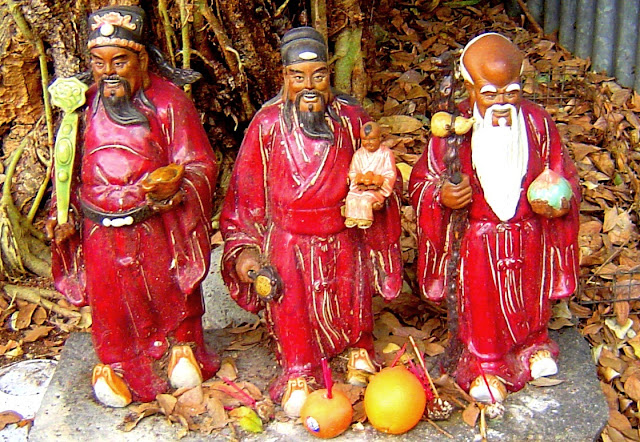 However, each figure carries traditional accoutrements. Thus Fuk, who here is standing in the centre and who represents good luck, carries a small child, while Luk (on the left), the symbol of prosperity, carries a gold ingot and wears the winged hat of an imperial court official. It’s worth noting that the Chinese traditionally equated having a member of the family in the imperial civil service with prosperity, which in the modern era would be seen as corrupt. Sau, the old man, holds a peach, the traditional symbol of longevity, in his left hand.

I discovered the next set in the same place as the grouping I used to illustrate The Three Immortals. It’s appropriate to describe these three figures as a set, because the colours obviously match. Note that the figures are standing on a wooden bench seat, which would not be unusual in an indoor setting, but this location is next to a road junction, which may or may not be significant. 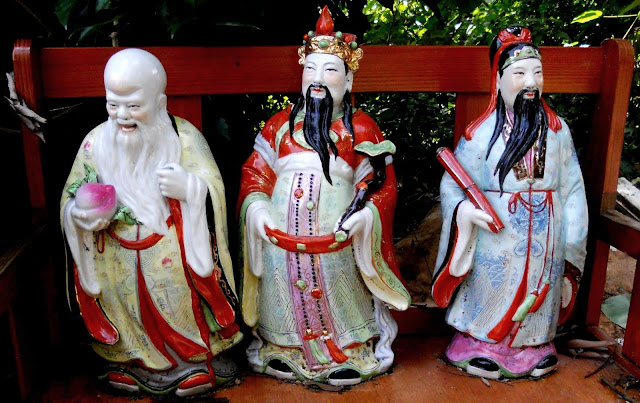 In this image, the three are in their traditional positions, although Fuk is not carrying a small child. However, he does hold a scroll in his right hand, representing the quality I have previously suggested he personifies: wisdom. Luk does not wear a winged hat here, but his headgear is obviously more opulent than that worn by Fuk. Sau carries the peach of immortality in his right hand, but I have no idea whether that is significant either.

I came across this next chaotic grouping in a completely unexpected location: on bare ground underneath an ornamental tree. These figures are the smallest in this collection, probably no more than 30cm high: 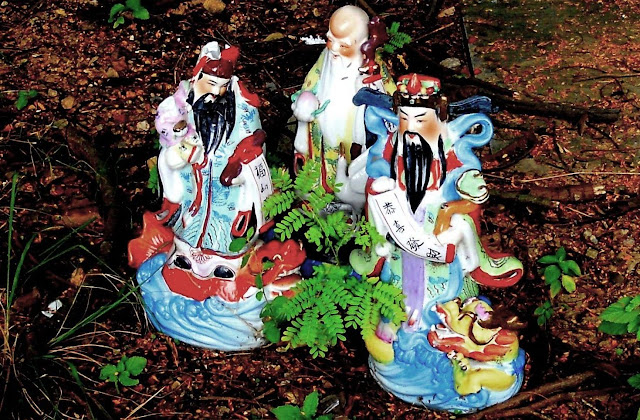 You should, by now, be able to identify who is who.

You may by now be wondering about the title of this post. Well, take a look at this next photograph: 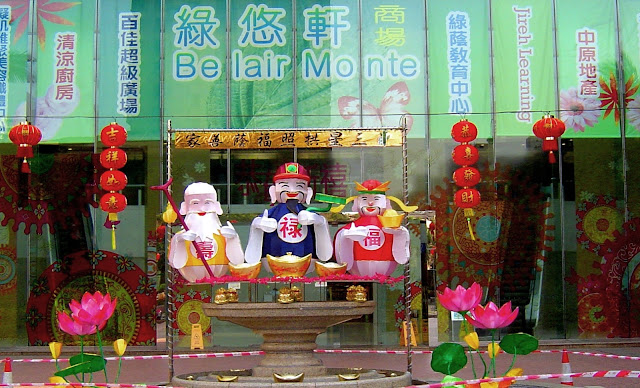 This display was erected outside Belair Monte, a downmarket housing estate on the eastern edge of Fanling, for Chinese New Year in 2015. The phrase ‘cheap and tacky’ springs immediately to mind. The entire display was made from paper!

As for the sublime, a couple of weeks ago, I was cycling along Ping Che Road, focusing on where I was heading next as part of my explorations for The Final Frontier, when I spotted a remarkable sight just off the road to my right: 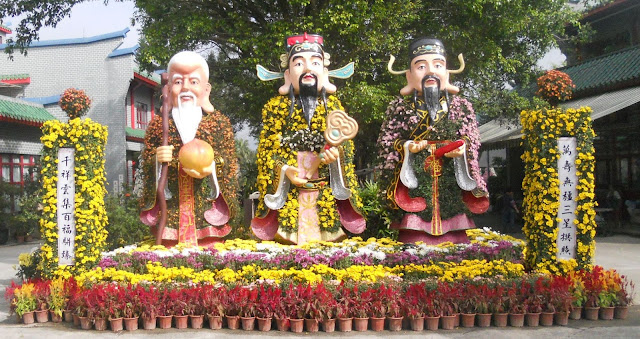 These figures are about 4 metres high, and their clothes have been fashioned from real flowers. In other respects, they are perfectly traditional, but note the size of the earlobes, an attribute that is highly prized in Chinese culture. At the time, I stopped only to take this photo, but I came back here on Boxing Day with Paula, who wanted to see these figures for herself, and we found that they had been erected at the entrance to what appears to be a Taoist monastery. The extensive grounds are a pleasure to walk around, so look out for a post on the subject in the future.